Distraction Tactics: Human rights abuses while the world is preoccupied with COVID-19

While the world is preoccupied with COVID-19, the Myanmar government has taken unprecedented steps to undermine further the right of access to information of its citizens.

Since June 2019, several townships in Rakhine and Chin State are cut off from the rest of the world. While the fears of COVID-19 spread throughout the world, the Myanmar government expanded the internet shutdown to five more townships on 3 February 2020.

According to Access Now, “the internet blackout prevents people from getting informed, protecting themselves and their loved ones, and stopping the spread of the virus throughout their communities.” It called on the government of Myanmar to end the Internet shutdown.

The United Nations also voice this sentiment. “Internet access is critical at a time of crisis,” David Kaye, United Nations special rapporteur on the right to freedom of opinion and expression, said in a statement.

Then on 24 March, the government declared the Arakan Army, an Ethnic Armed Organisation in Rakhine State, a terrorist organisation and unlawful association.

The Anti-terrorism Law was then used to intimidate and sue editors of media organisations for talking to Arakan Army members.

On 30 March, police arrested and charged Nay Myo Lin, the editor-in-chief of the Mandalay-based Voice of Myanmar, under Myanmar’s Counter-Terrorism Law for an interview with the Arakan Army spokesperson. He was released on 9 April and told his case would not be pursued.

On 31 March, police raided the home of the editor-in-chief of Khit Thit News.

Police also raided the office of Narinjara media and arrested three journalists: they were released later that evening. The Democratic Voice of Burma reported that the editor-in-chief of Narinjara, Khaing Mrat Kyaw, has been charged under the Counter-Terrorism Law but has not been arrested.

The editor-in-chief of the news agency Development Media Group, which has reported on the conflict in Rakhine State, is currently facing a complaint under the Unlawful Associations Act, which carries a sentence of up to five years in prison.

Wire agency Reuters was also being sued by the military for covering civilian deaths after shelling in Rakhine State. They withdrew the complaint against Reuters, but not against the local lawmaker who accused the army of carrying out the shelling.

On 23 March, the Ministry of Transport and Communications instructed four mobile operators to block access to 221 websites deemed to be spreading “fake news” or containing explicit content, according to the Myanmar Times.

Narinjara and Development Media Group said that since 24 March, they had been blocked by all four mobile operators. Other registered media outlets in Shan and Karen States and Mandalay region also reported that they were blocked.

Access to information is also restricted through other means. Mobile phone users are told by the Posts and Telecommunications Department to register SIM-cards by 30 June 2020 with their ID’s or their phone number will be deactivated.

In October 2019, the government fined telecommunication providers US$ 100,000 each over not complying with the 2014 Code of Practice for Mobile Customer Registration. Each user is only allowed to own two SIM-cards per provider under the rule.

The practice severely limits access to information as it excludes anyone without a legal ID, like the Rohingya, who are not officially recognised as one of Myanmar’s 135 ethnic minorities. SIM cards need to be registered with a national registration card (NRIC card) or passport for foreigners.

The website of Telenor, the Norwegian telecommunication provider, states that “Race/ Nationality” of the phone user also has to be registered. In 2013, NGOs gave off warnings when the 2014 population census included questions about ethnicity. 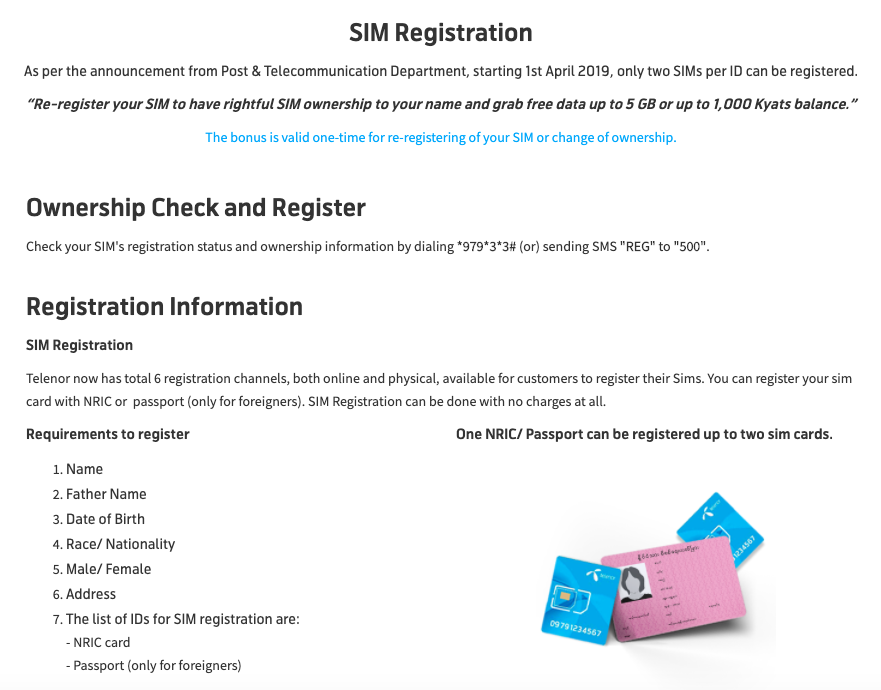 Aung San Suu Kyi personally urges citizens to register their SIM-cards stating, “[i]f someone intends to hide his/her identity, we can guess that something is wrong with them.”

The move would severely undermine privacy rights and increase the ease of surveillance of citizens.

All this in a time when the fighting continues in the border areas. On 3 April, UN Secretary-General Antonio Guterres warned “the worst is yet to come” for COVID-19 in conflict areas.

Share:
Taking you where others don't
Ready to make sense of foreign news?