As early as 3 February, civil society organisations were warning for the spread of COVID-19. Since late December, China was suffering the brunt of a, by then, unexplained respiratory disease.

Many of those migrants returned to Myanmar just before the Chinese New Year from 25 January until 8 February 2020.

On 3 February, the Health Minister Myint Htwe said to the Myanmar Times, that the government is considering temporarily closing the border with China as part of measures to prevent the entry of the virus into Myanmar. But the various land borders with China were not closed until 1 April after some initial restrictions were implemented on 29 March.

Other main borders with India and Thailand, were closed on 10 and 23 March respectively.

The delay in border restrictions could mean the virus already spread through Myanmar.

“The difficulty we face is that we can only check whether they have fever. The virus can stay in the body for 14 days even though the people do not have fever. But we cannot check at the illegal gates,” said Thaung Tun, a member of the Gayuna Social Welfare Association of Muse, to the Myanmar Times early February.

At the official land border points, there are no COVID-19 test kits, only thermometers. So anyone carrying the virus without displaying symptoms can bring the virus into Myanmar.

Myanmar didn’t have test kits inside the country until late February after donations from other countries. And recently, an additional 50,000 tests were donated by the United Nations. 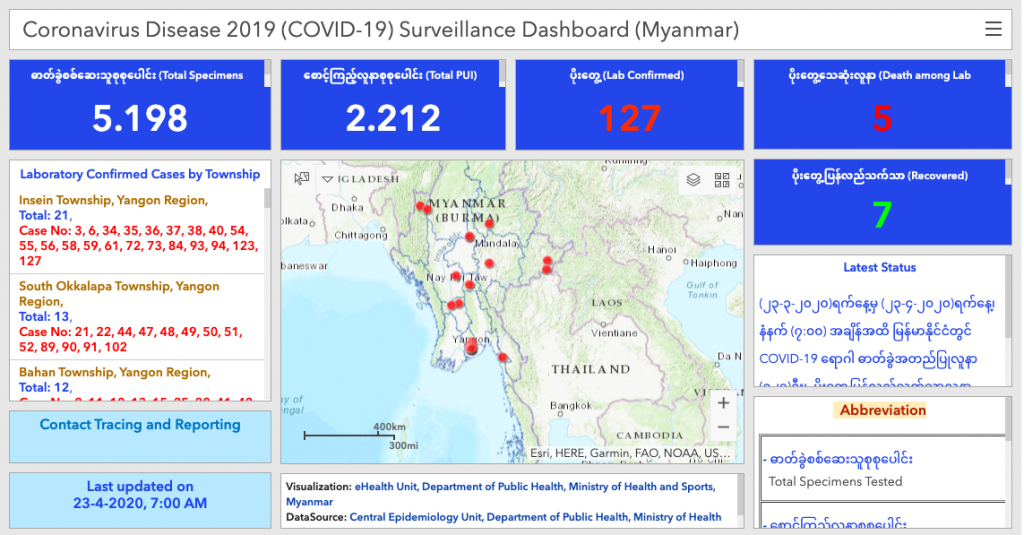 Screenshot website Ministry of Health and Sports on 23 April 2020.

The lack of available testing and the porous borders with neighbouring countries that have large outbreaks including Thailand, India and China, led civil society organisations to send out a warning in early February.

Human Rights Watch also issued a warning on 17 March stating “[i]n a world beset by the coronavirus pandemic, denial is becoming an increasingly rare commodity – but don’t tell that to Myanmar’s government, which still claims there are no cases of COVID-19 in the country.”

The especially strong message followed a press conference by government spokesperson Zaw Htay stating that “[t]he lifestyle and diet of Myanmar citizens are beneficial against the coronavirus.”

The government is mainly focusing its prevention measures on people arriving in the country via the main airports. Passengers arriving from most countries face a 21-day quarantine at the government facilities, while diplomats can spend the quarantine at home.

Migrants are advised to quarantine for 28 days in a designated area in their village, but before they arrive there, they could have already transferred the virus to others during their travel across Myanmar.

The border areas could be a blind spot in the detection of COVID-19. Myanmar’s Ministry of Health and Sports permanent secretary Thar Tun Kyaw said to Channel News Asia that COVID-19 cases could have slipped in through the land borders before 23 March, when Myanmar confirmed its first two positive cases.

“The authorities have since started tracking and checking [the temperature of] all returning Myanmar nationals from Thailand, via the borders,” Dr Thar Tun Kyaw said. “But before [23 March], at least 32,000 people had come in through the Thai-Myanmar land border and they were not checked,” he said.

And once arrived in their home state, there are no tests available either. For example, in Shan State, Sai Yawd Muang from the Restoration Council of Shan State (RCSS) said to Irrawaddy, that medical teams have travelled across Shan State to check villagers. “In fact, he was talking about checking temperatures—not testing for the coronavirus itself,” according to Irrawaddy.

Even hand soap and hand sanitiser are difficult to come by in some areas. “In places where alcohol-based hand-sanitizing (sic.) gel is not available (in many villages, it is impossible to find soap, let alone hand gel) [RCSS] has advised people to use local moonshine made from rice, mixed with warm water, to wash their hands,” Irrawaddy reports.

An added difficulty in detection is poverty in rural areas. Myanmar boasts free public healthcare, but people still need to pay for supplies and medicine. And most people in the poorest country in Southeast Asia, can not afford to pay for transportation to a hospital or lose their daily wage.

In Myanmar, diabetes and heart diseases are widespread. Circulatory diseases like heart attacks and high blood pressure are the second largest cause of death in Myanmar, according to a 2016 study. And a 2014 WHO study found raised blood glucose levels, an indicator for diabetes, in 10,5 percent of the population.

The average life expectancy in Myanmar is only 65 for men and 69 for women, but estimates show still 50,000 people might die in Myanmar this year due to COVID-19.

Since a large part of Myanmar citizens is considered high risk for complications of COVID-19, the Myanmar government should have closed the land borders sooner. Right now, it can act by increasing testing capabilities outside the main cities and distributing free hand soap across the country.