A mountain of debt from different sources pushed brothers Narayan Shelke and Janglu Shelke of Bothbodan village, Yavatmal to suicide in 2014 and 2018 respectively says the family. They jointly owned four acres of land where crops, mostly cotton and soybean, continuously suffered because of hailstorms and droughts.

Narayan’s nephew Kawadu Shelke, said, “He [Narayan] was not being able to repay loans of Rs 50,000 (US$ 706) taken from [both Yavatmal] DCC Bank and Central Bank of India. Bank officials visited his house asking him to repay the loan. Humiliated and out of fear that the bank might take his land, he committed suicide.” 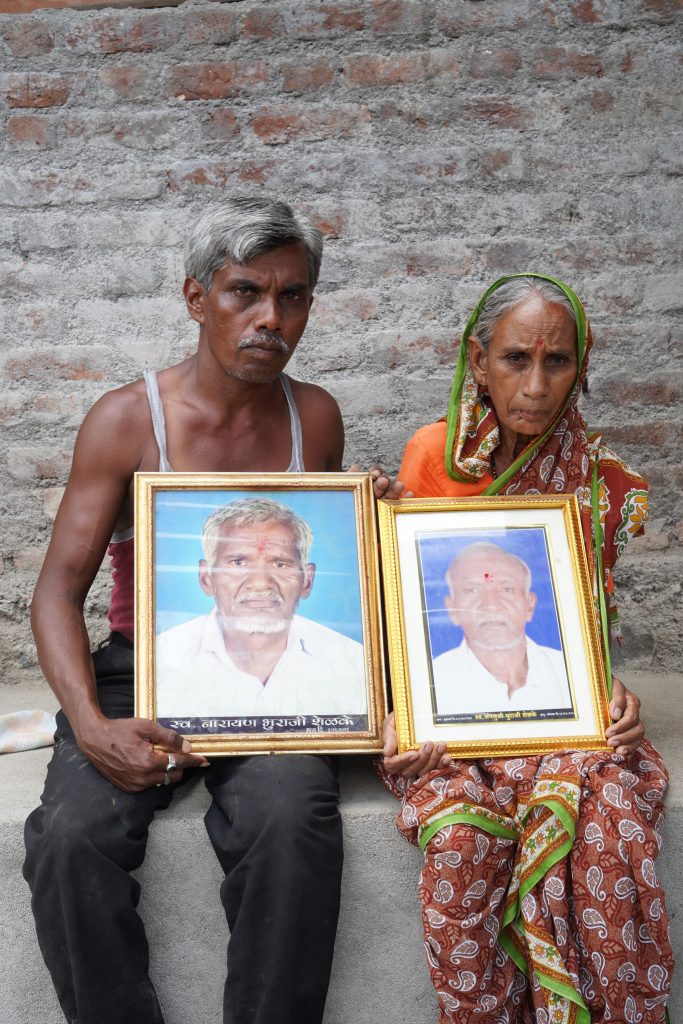 Narayan’s brother and Kawadu’s father, 65-year-old Janglu, too committed suicide in September 2018, unable to bear the brunt of crop failure and a mountain of debt – Rs 40,000 (US$ 565) from Yavatmal DCC Bank and Punjab National Bank respectively, as well as Rs 35,000 (US$ 494) from Andhra Bank. Yavatmal DCC Bank, Central Bank of India, Punjab National Bank and Andhra Bank did not respond to a request for comment.

According to the same report, NBFC-MFIs (Non-Banking Finance Company- Microfinance Institutions) also contributed to agricultural credit. Between 2013-2019, NBFC-MFIs experienced “phenomenal growth” as loans from banks to NBFC-MFIs qualified as priority sector lending and owing to RBI’s guidelines regulating NBFC-MFIs. RBI also stipulated that MFIs deploy a minimum 50 percent of loans for income generating activities, which MFIs have deployed towards agriculture, animal husbandry and trading. NBFC-MFI agricultural loans accounted for 57 percent of their gross loan portfolio in March 2019 according to data from industry association MFIN.

Sukhdev Sonpat Narote, 65-year old of Devpur village, Buldhana district hung himself from a tree on 24 April 2019. Sukhdev failed to get a bank loan on farm land of five acres and took a home loan instead, of Rs 140,000 (US$ 1977) from Mahindra Finance, an NBFC, and from relatives. Like other farmers, his soybean crop had failed during the last two years since there was no rain.

According to Narote’s son Vishwanath, the Mahindra Finance loan was in the name of his brother, Sandip, even though his father had taken the loan. “The company agents took away our home property papers as mortgage. We have to pay Rs 25,000 (US$ 353) every six months for the next five years. But we have not received a loan card,” he says. Mahindra Finance did not respond to several requests for comment.

Private lenders made the life of 50-year old Ramesh Gofnarayan of Ghusar village, Akola district miserable according to his son Nitin. “Private lenders who he had borrowed from came regularly to ask for repayment. This humiliated him. He was depressed. But we did not know that he would take such a drastic step.” Nitin isn’t aware of how much his father owed in farming loans to the lenders. Ramesh also had a loan of Rs 50,000 (US$ 706) from Akola DCC Bank which was not waived after his suicide, which his family is now repaying.

The Maharashtra government announced a loan waiver to the tune of Rs 340,000 million (over US$ 4 billion), ahead of the 2017 state elections with the stated intent of alleviating the distress of farmers. But the suicides continued, with 4500 farmers committing suicide after the loan waiver announcement, according to an RTI filed by Ghadge. On the other hand, the Rs 100,000 (US$ 1412) compensation to families of farmers who kill themselves is being increasingly denied, because of compensation claims being rejected, according to responses from the Maharashtra state Revenue Department to Ghadge’s RTI queries.

According to a September 2019 report of the RBI Internal Working Group to Review Agricultural Credit, the announcement of loan waiver announcements during election cycles suggests political expediency and fails to address long term issues in agriculture. Non-performing assets (NPA) levels of banks also rose in states where loan waivers were announced, as people stopped repaying loans in anticipation of the loan waivers, including in Maharashtra which had among the highest NPA levels in 2017-18.

However, a 2019 India Spend report noted the total debt India’s of top 10 corporate borrowers, among them Reliance ADAG, Vedanta, Essar, Adani and Jaypee, was four times greater than the farmer loan waivers announced by 10 state governments from 2017 to February 2019. Another loan waiver was announced in December 2019.

According to information accessed by Global Ground Media from the State Crimes Records Bureau (SCRB), Criminal Investigation Department in Pune, the number of suicides due to loans from banks or registered MFIs in 2015 was 224 for Amravati, 183 for Yavatmal, 142 for Wardha, 86 for Buldhana and 62 for Washim.

Interviews by Global Ground Media with nearly 40 families of farmers who committed suicide in Amravati region showed at least 12 instances where the farmers had taken loan from regional DCC Banks. 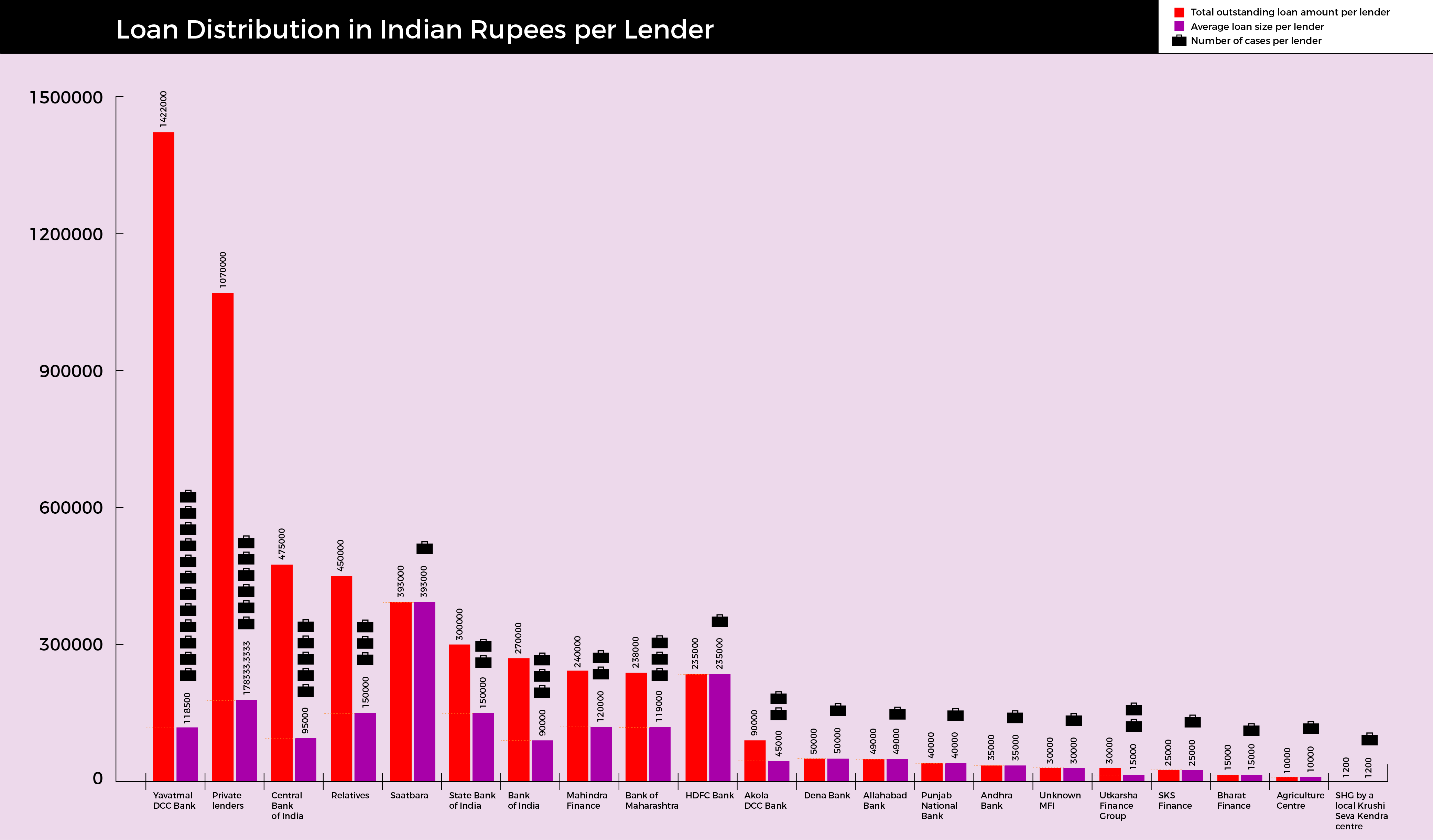 Short term rural institutional credit in India, including Maharashtra, is disbursed through state cooperative banks, DCC Banks and primary agricultural credit cooperative societies (PACS). The profitability of DCC Banks in terms of both operating profits and net profits, declined in 2016-17.

One effect of high NPA levels is that bank managers feel increased pressure to recover loans.

Professor Ramakumar says to Global Ground Media: “The bottom lines of cooperative banks are suffering, so they may put more pressure on clients. Bank managers at the lower level such as the branch level, and also at the circle, district, state and national level need to report back to their head offices and show that dues have been recovered. They raise and enforce repayment rates, which farmers would view as harassment. Just like moneylenders pressure borrowers to repay, so do commercial and cooperative banks. It is no surprise that farmer suicides are linked to formal banking institutions.”

Professor Ramakumar also points to a trend whereby commercial banks contract external agencies or agents to recover loans from borrowers. “In such cases, the bank does not contact the borrower – the agency does. This sort of outsourcing is happening in a big way, especially for commercial banks.”

This article was developed with the support of the Money Trail Project (www.money-trail.org).