The 200,000 global estimated deaths attributed to pesticide poisoning worldwide each year may seem distant to urbanites who have likely never handled the toxic substances used to protect the food they eat from pests, weeds, and fungi. On the other hand, for farmers, particularly those in developing countries, acute (occurring at a high dose over a short period of time) pesticide poisoning is all too familiar, and it is more difficult to measure the long-term negative health effects of chronic exposure.

Among the effects of chronic exposure that scientists most agree on are benign or malignant tumours, blood disorders, nerve disorders, endocrine (nervous system) disruption, negative reproduction effects and birth defects.

The effects of the consumption of food with pesticide residue, however, are even more difficult to establish. In a 2015 study comparing the health of self-proclaimed “moderate consumers of organic food” and consumers of generic foods, the moderate organic consumers had lower levels of synthetic pesticide in their urine and tended to be in better health. However, the lifestyle choices often associated with the decision to consume organic food, such as regularly eating more fruits and vegetables, cannot be overlooked in relation to improved overall health. 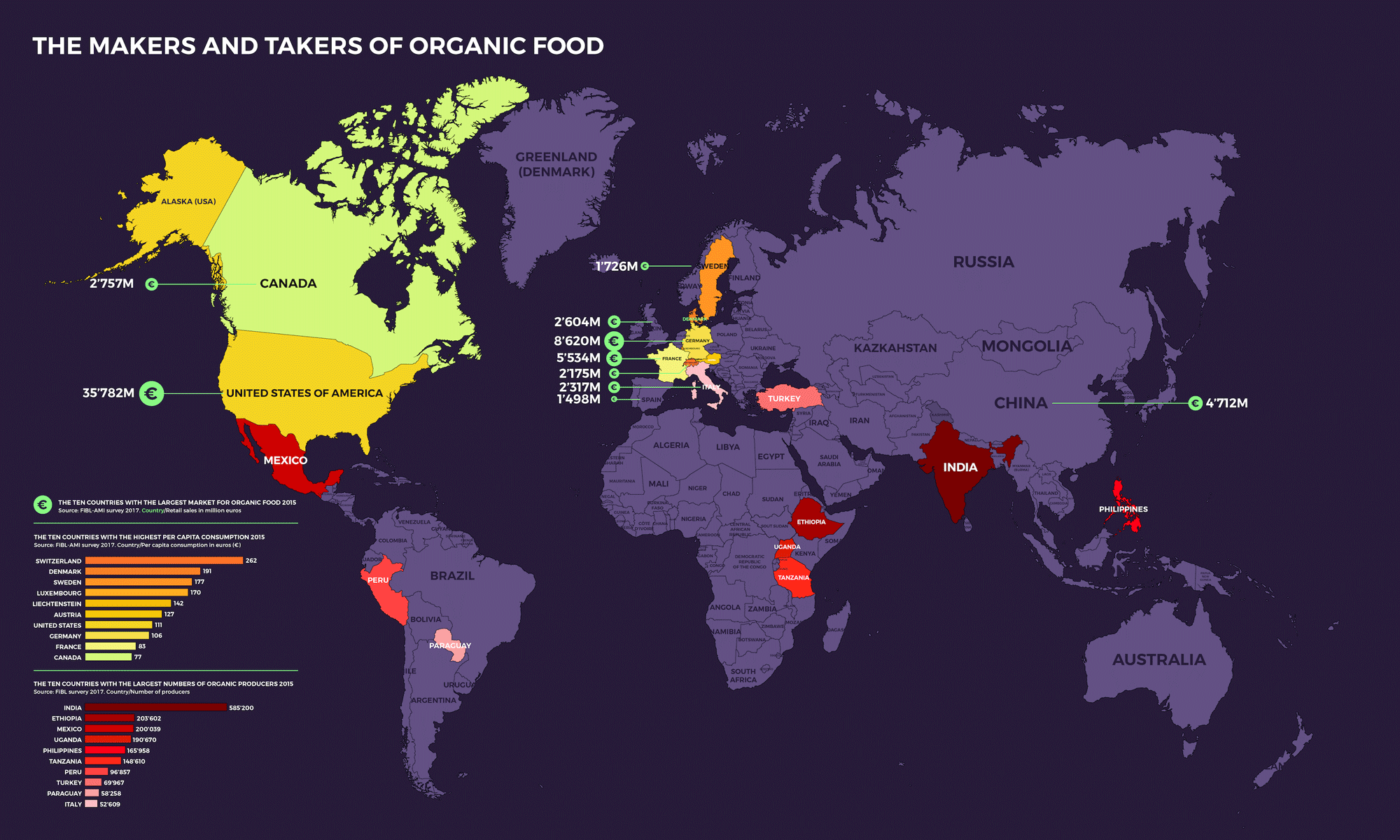 The general scientific consensus though is that organic food contains less pesticide residue. A 2014 study of 343 peer-reviewed reports found that organic samples contained one-fourth the pesticide residue levels of conventional samples. Epidemiological studies have found that exposure to even small amounts of specific synthetic pesticides through food, milk, skin contact or in utero, can impede neurological development in children.

Jay Feldman, Executive Director of the non-profit Beyond Pesticides and a former member of the United States National Organic Standards Board, says that in terms of impact, none of the pesticides allowed in organic farming approach the level of hazardous health and environmental effects that are associated with pesticides that are widely used in conventional agriculture.

Synthetic pesticide use has greatly evolved since this farming technology was first introduced in the 1930s. The 1962 publication of Rachel Carson’s book, Silent Spring, brought the world’s attention to the effects of unchecked pesticide use, from the disappearance of birds and wildlife to the cancer-causing properties of Dichlorodiphenyltrichloroethane (DDT), often referred to as a “miracle chemical” for its ability to vanquish mosquitos.

Ultra-harmful chemicals like DDT have since been banned in agriculture worldwide. However, there has yet to be a comprehensive study of the long-term effects of consuming food with pesticide residues that are widely considered safe.

A population-based study published in 2018 that followed 68,946 French adults for a mean time span of five years found an inverse relationship between the consumption of organic foods and the risk of cancer. Researchers concluded that the quadrant of participants who consumed the most organic food was 25 percent less likely to develop cancer, particularly breast cancer or lymphoma, than those in the quadrant that consumed the least organic food.

These findings are also problematic, however. The difficulty in separating other lifestyle traits from an organic diet can dilute the certainty of studies that link organic diets to decreased health risks. Nevertheless, these are compelling findings.

As studies sharpen and testing becomes increasingly rigorous, pesticides may appear to be safe when they are introduced. However, future research may expose new dangers. John R.  Reigart, Professor Emeritus at the Medical University of South Carolina, who has published studies on the neurological effects of pesticide exposure in children, says that the same cycle has been recurring since Silent Spring first exposed the harm of organochlorines.

“What has happened as long as I’ve been dealing with pesticides, since the 1970s,” says Reigart, “is that each new category of pesticides, when first introduced, is thought to be safer than the last group. But, as we gain more experience, we find that is [sic] not true, so there’s this treadmill of substituting new pesticides for the old ones.”

“Organophosphates and Carbamates replaced Organochlorines [in the 1970s], then there was a shift to Pyrethroids, then they became environmental risks, as well as health risks, as we learned more about them, and the latest group is the Neonicotinoids, which everyone thought were safe, and we’re learning they’re not,” he added.

Reigart, a proponent of organic agriculture, points out that chemically-intensive agriculture requires the use of more and more chemicals in order to have the same effect over time, as pests tend to adapt to the substances. Reality then sets in, which is difficult to test for, as these chemicals are being approved for use in small, controlled settings. 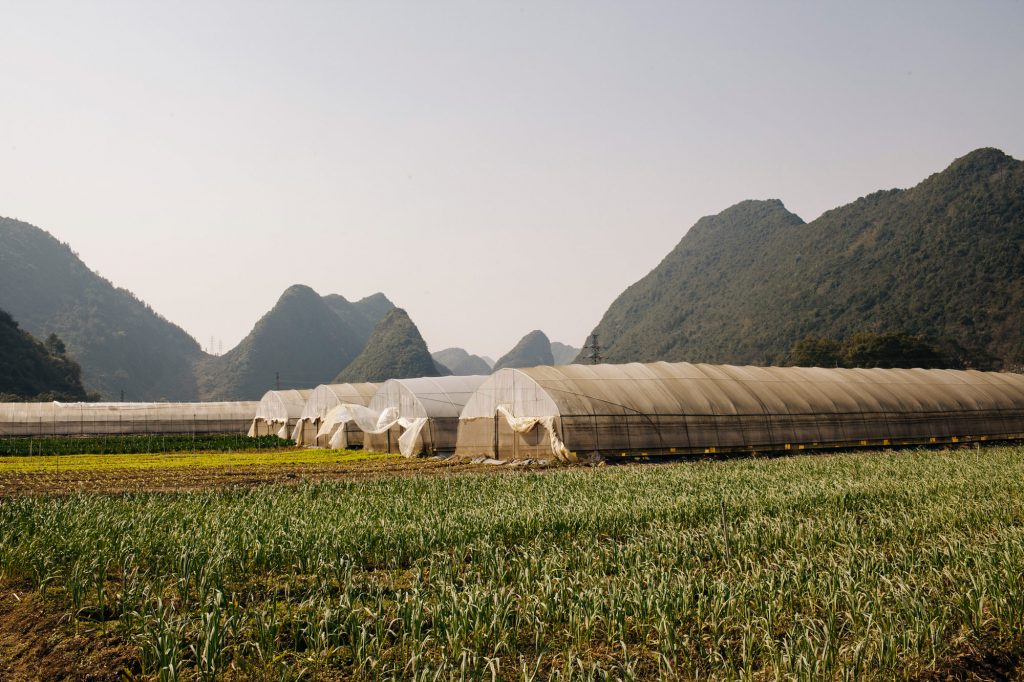 Fields of onion, garlic, and greens thrive at Raymond and Becky Kwong’s farm in the rural outskirts of Qingyuan, a mountainous subtropical region east of China’s most populous city Guangzhou. (Qingyuan, China, 5 February 2018)

“As these chemicals get used in millions of tons, and environments are exposed and more people are exposed, we always recognize, after a while, that these things aren’t as safe as they were proposed to be. We’ve got to get off this treadmill at some point,” Reigart says.

Article and pictures by Viola Gaskell.
Editing by Mike Tatarski and Anrike Visser.
Illustration and infographic by Imad Gebrayel.