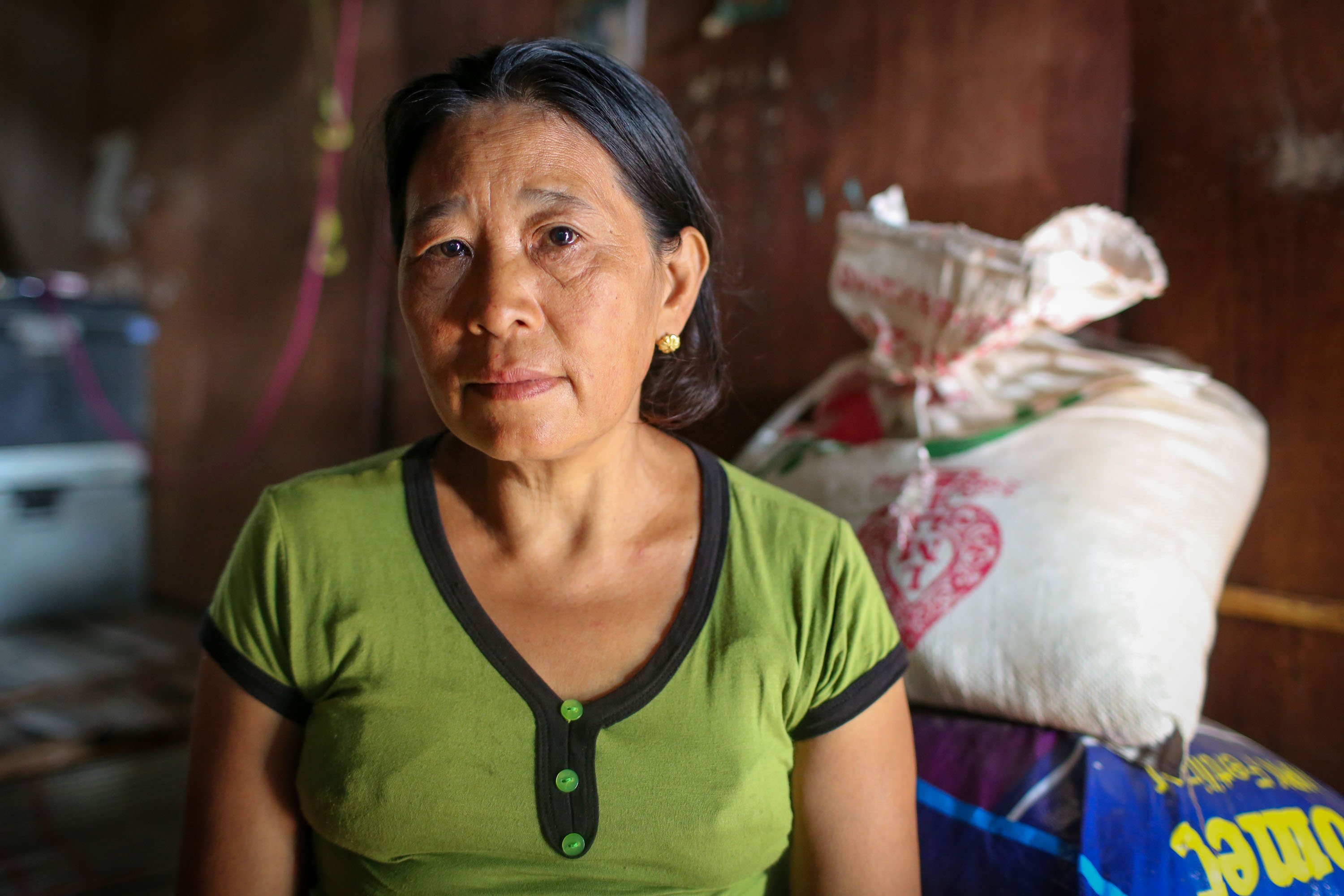 Nann Aye Nu sits in her home in Kyu Sot Camp in Namtu, Shan State, where she has lived since July 2016. Behind hit sits the rice she is given by NGOs that work in the region. Her home was destroyed due to fighting between EAOs in the region. (Namtu, 18 June 2019) 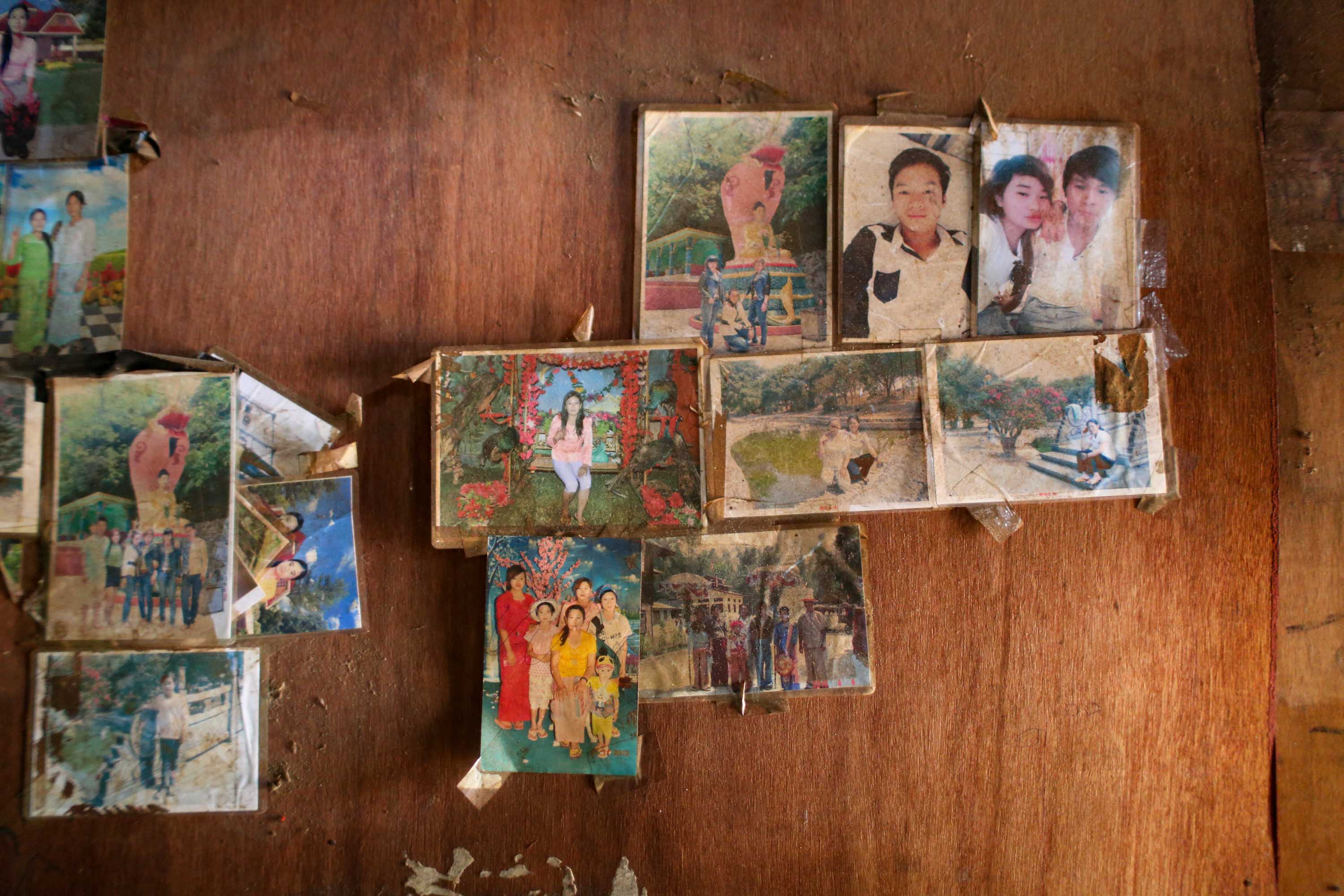 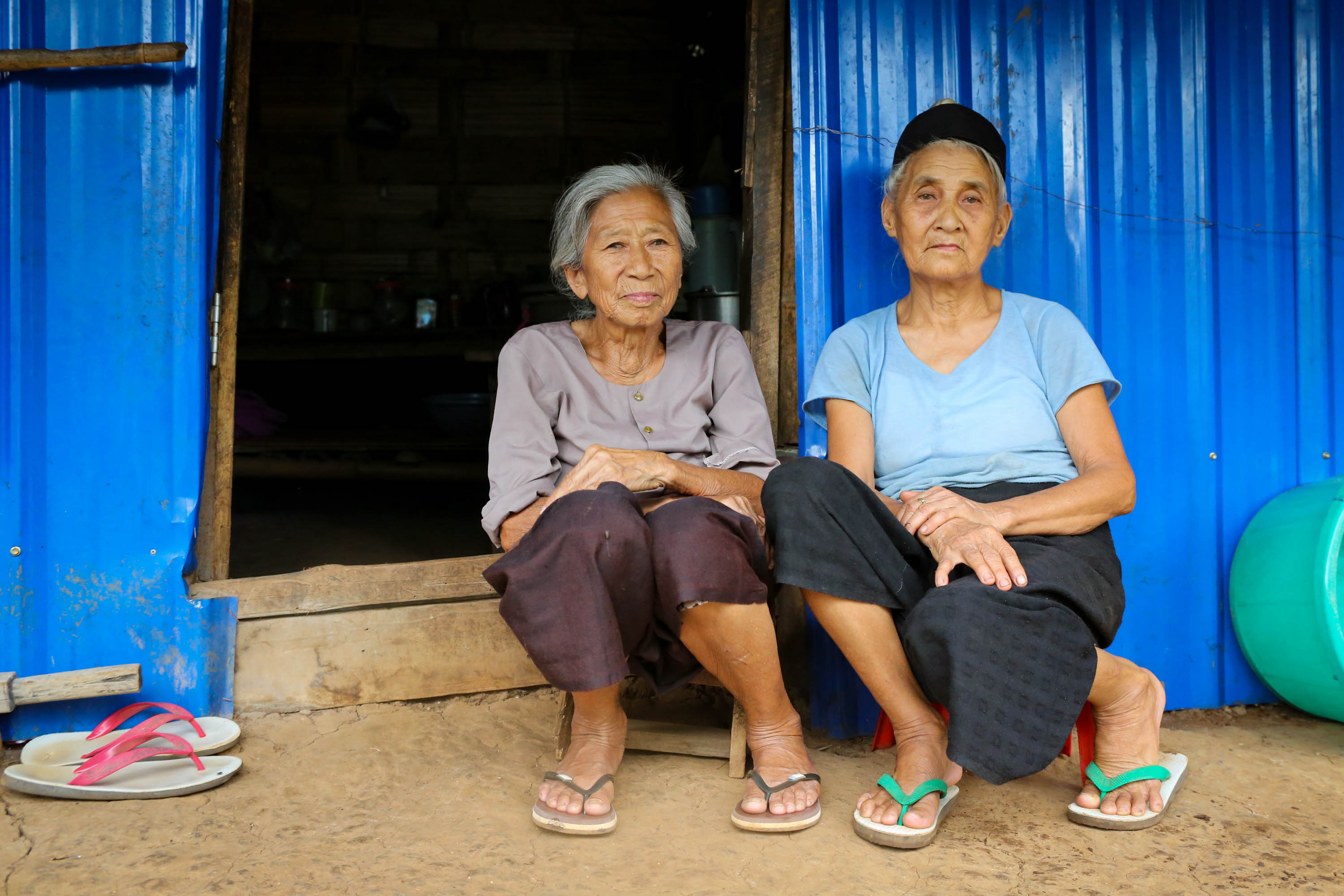 Nan Naing An Naw (left) and Nan Naing San Kyin sit outside the home of Nan Naing An Naw in Kyu Sot Camp, Namtu. The two women fled their village in northern Shan after intense fighting between EAOs in July 2016. The women have known each other since they were little girls and recalled what life was like during Japanese occupation. (Namtu, 18 June 2019) 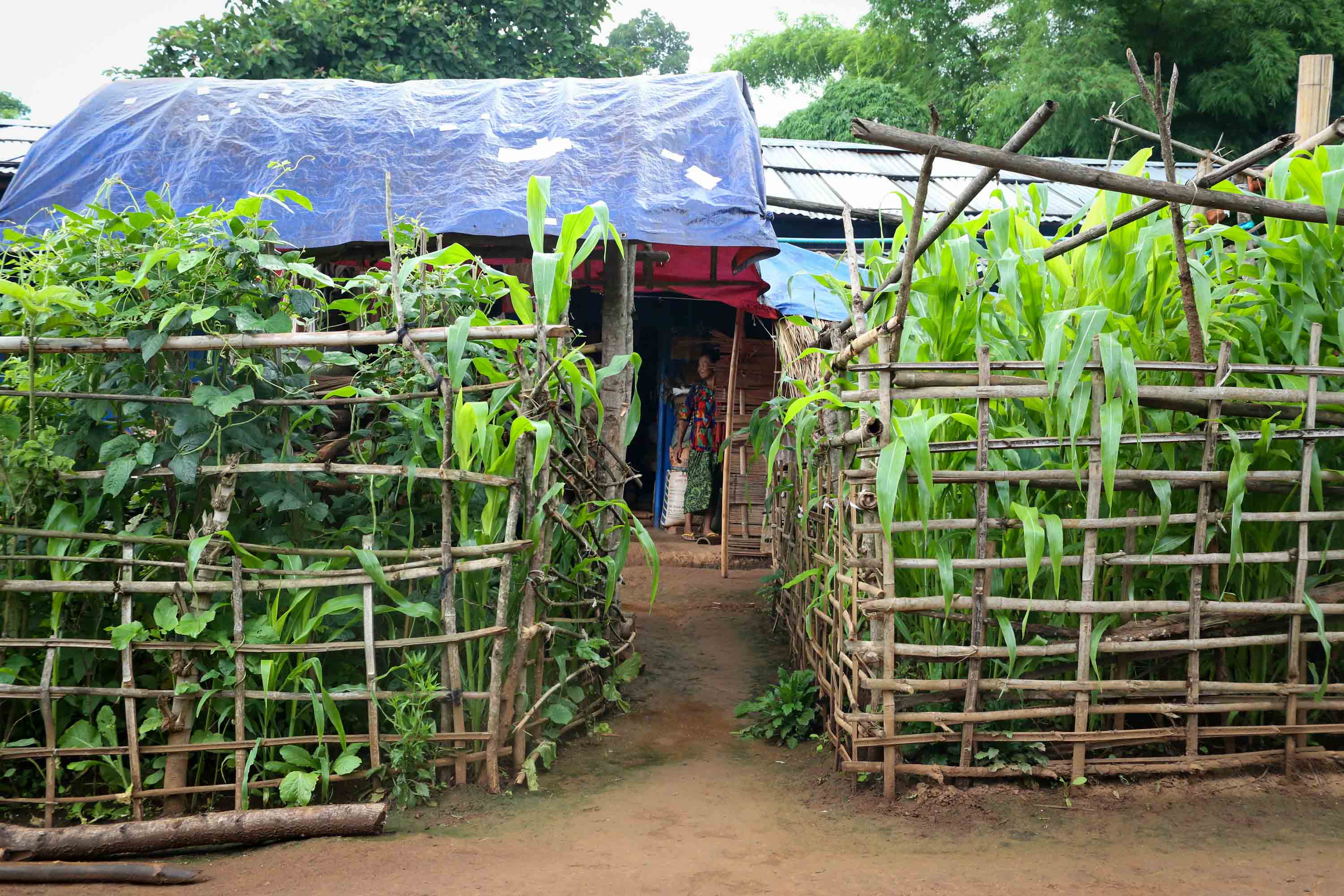 A home in Kyu Sot camp grows corn. Many in the camp have lived there since 2016 and have voiced they they do not want to move again. (Namtu, 18 June 2019) 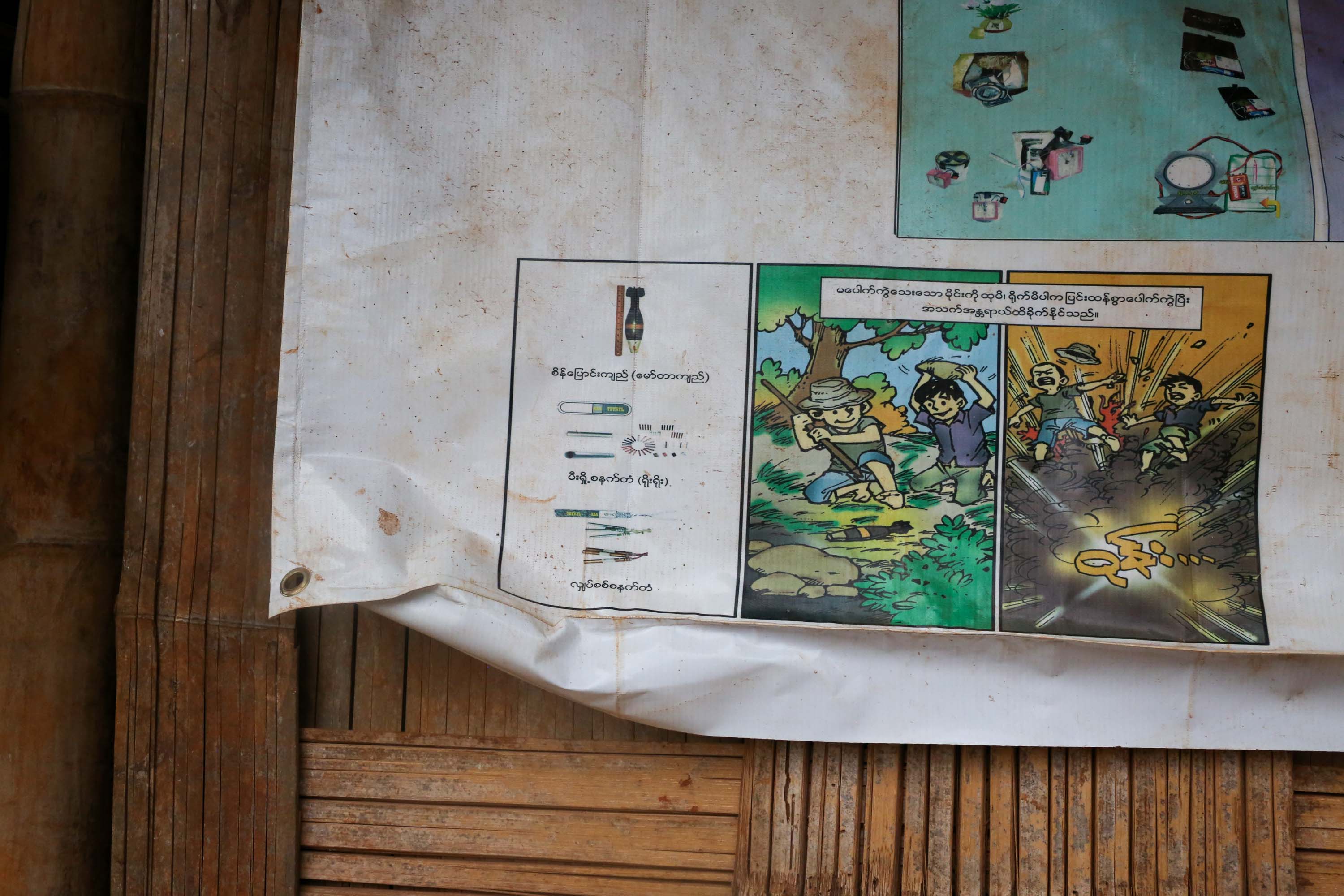 Signs telling people what to do/not do when they come across landmines in the region are hung on homes in nearly every camp in northern Shan. (Namtu, 18 June 2019) 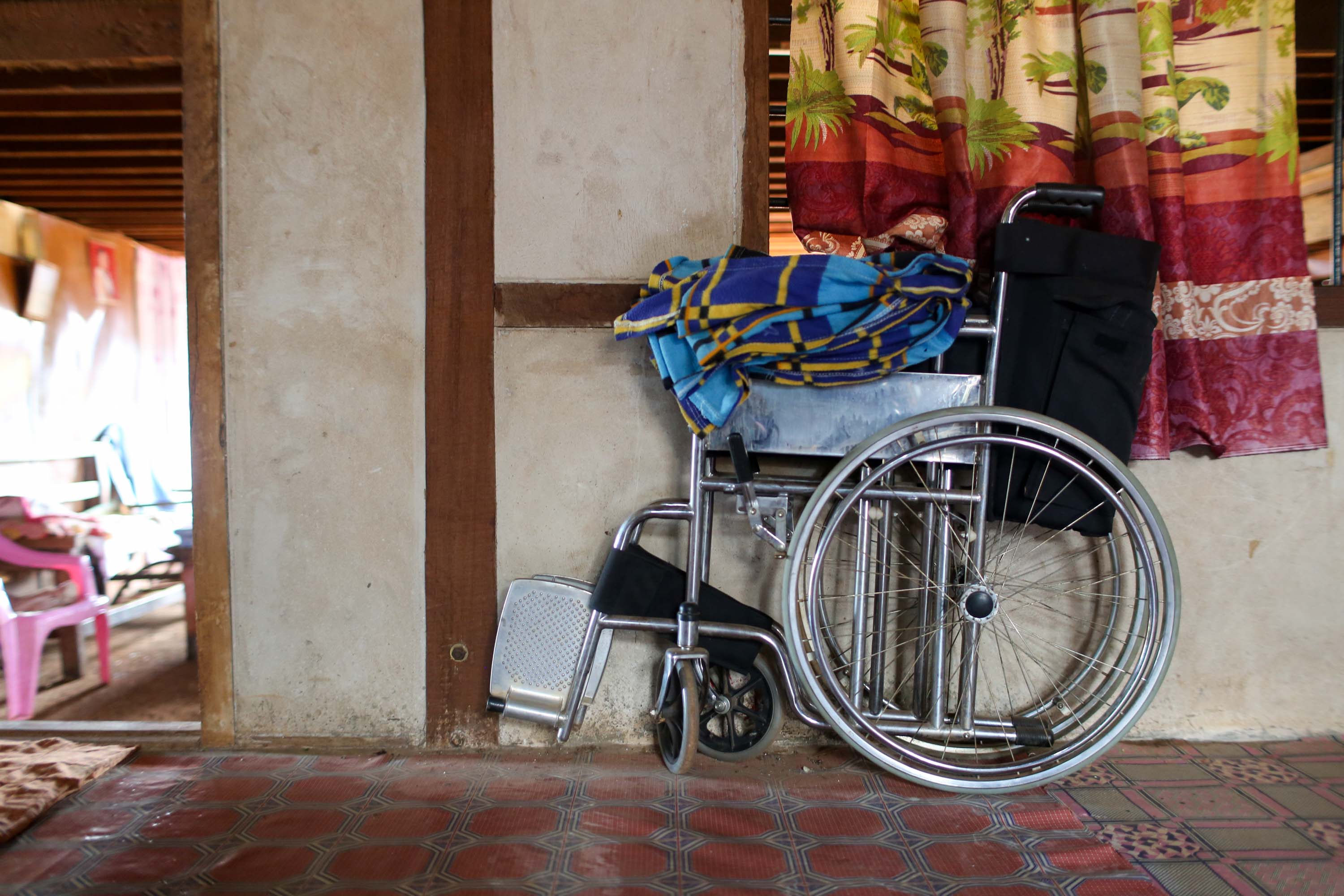 The wheelchair that Shwe Myat uses to transport her husband, Wee La Tat, during forced evacuation because of fighting. (Panglong, 19 June 2019) 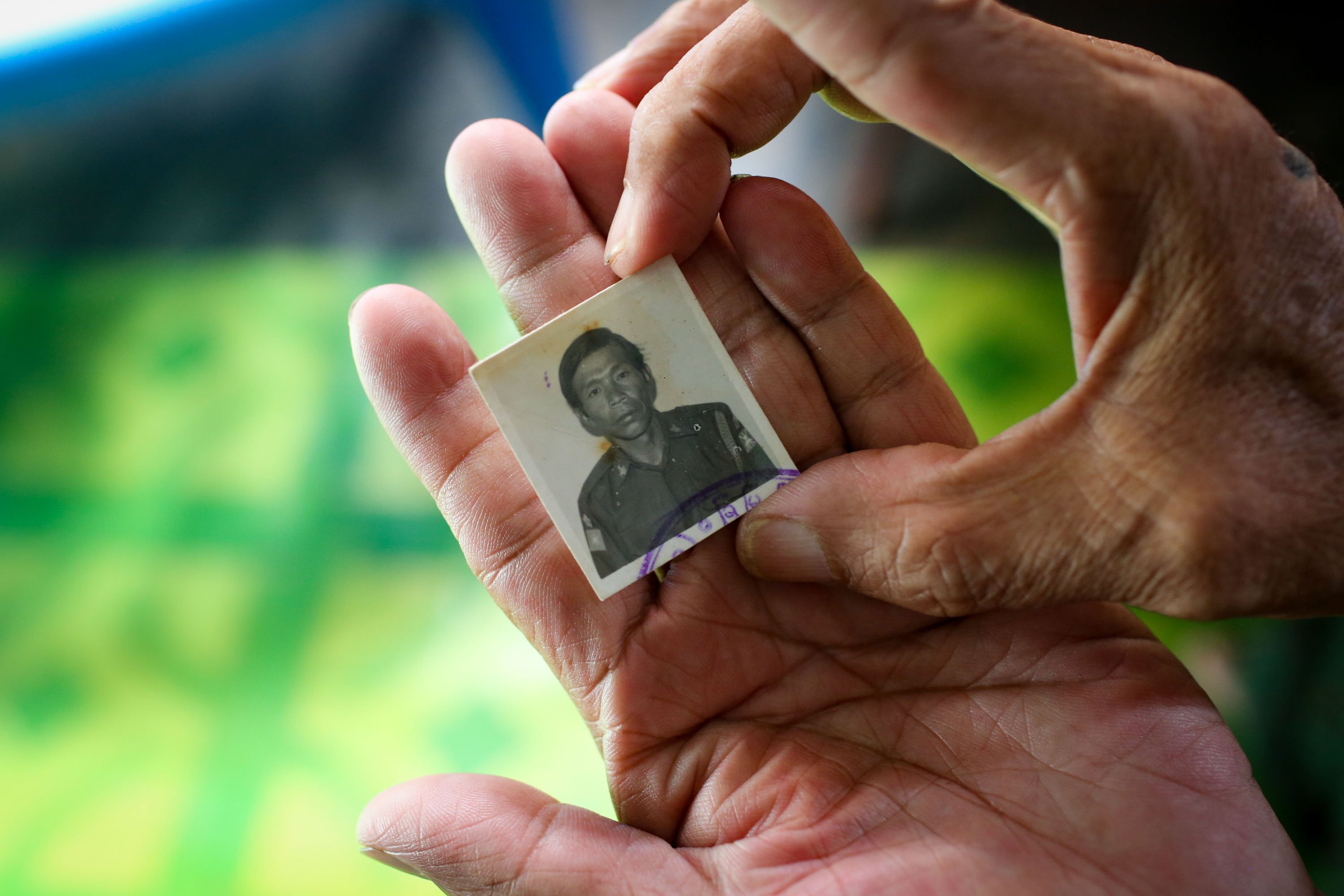 Tatmadaw veteran Win Maung holds a portrait of himself when he was younger and actively serving in the military. Win Maung now lived in a village designated for Tatmadaw veterans that sits on the outskirts of Lashio. (Lashio, 20 June 2019) 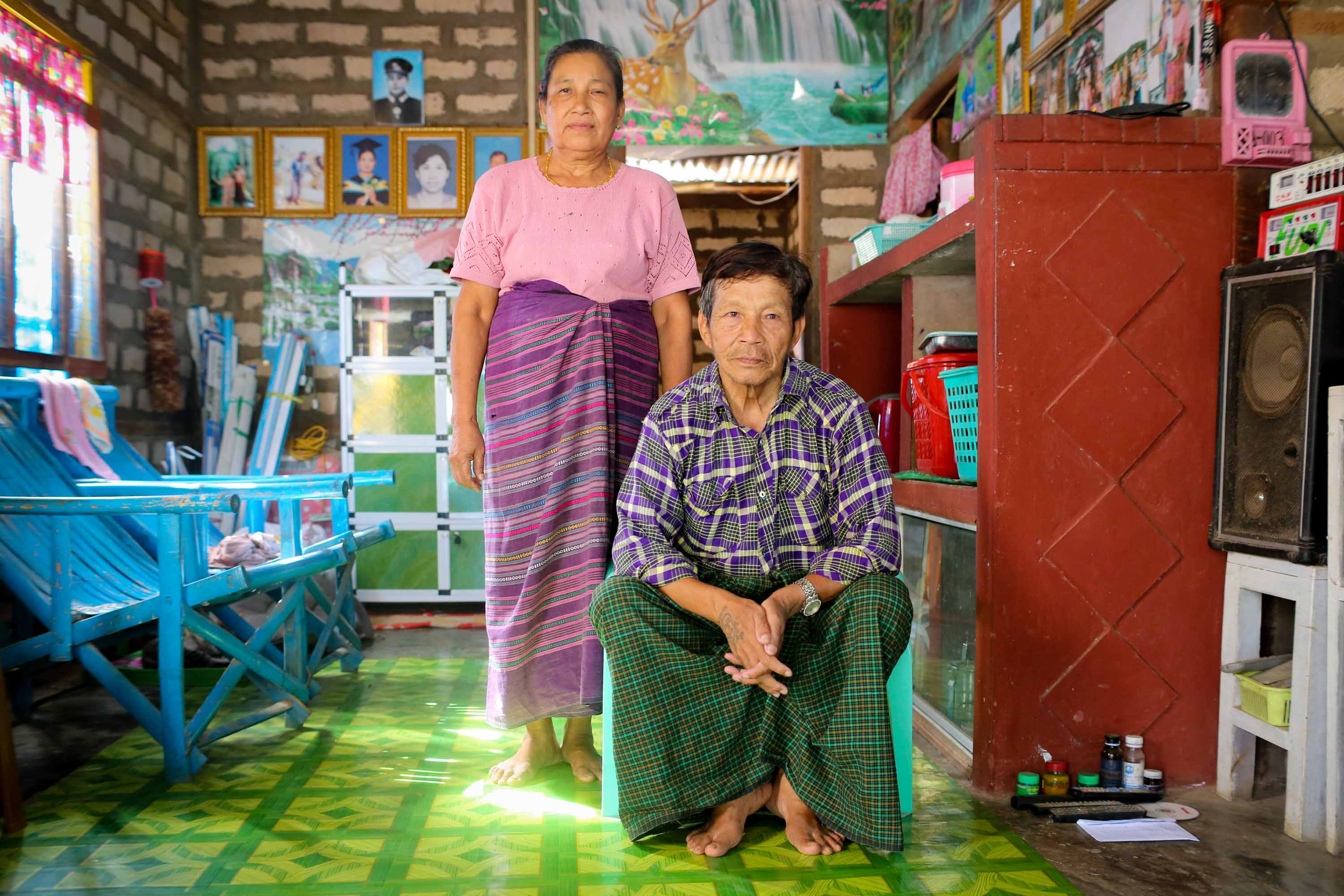 Tatmadaw veteran Win Maung (sitting) and his wife, Sann Myint (standing), in their home on the outskirts of Lashio, Shan State. (Lashio, 20 June 2019) 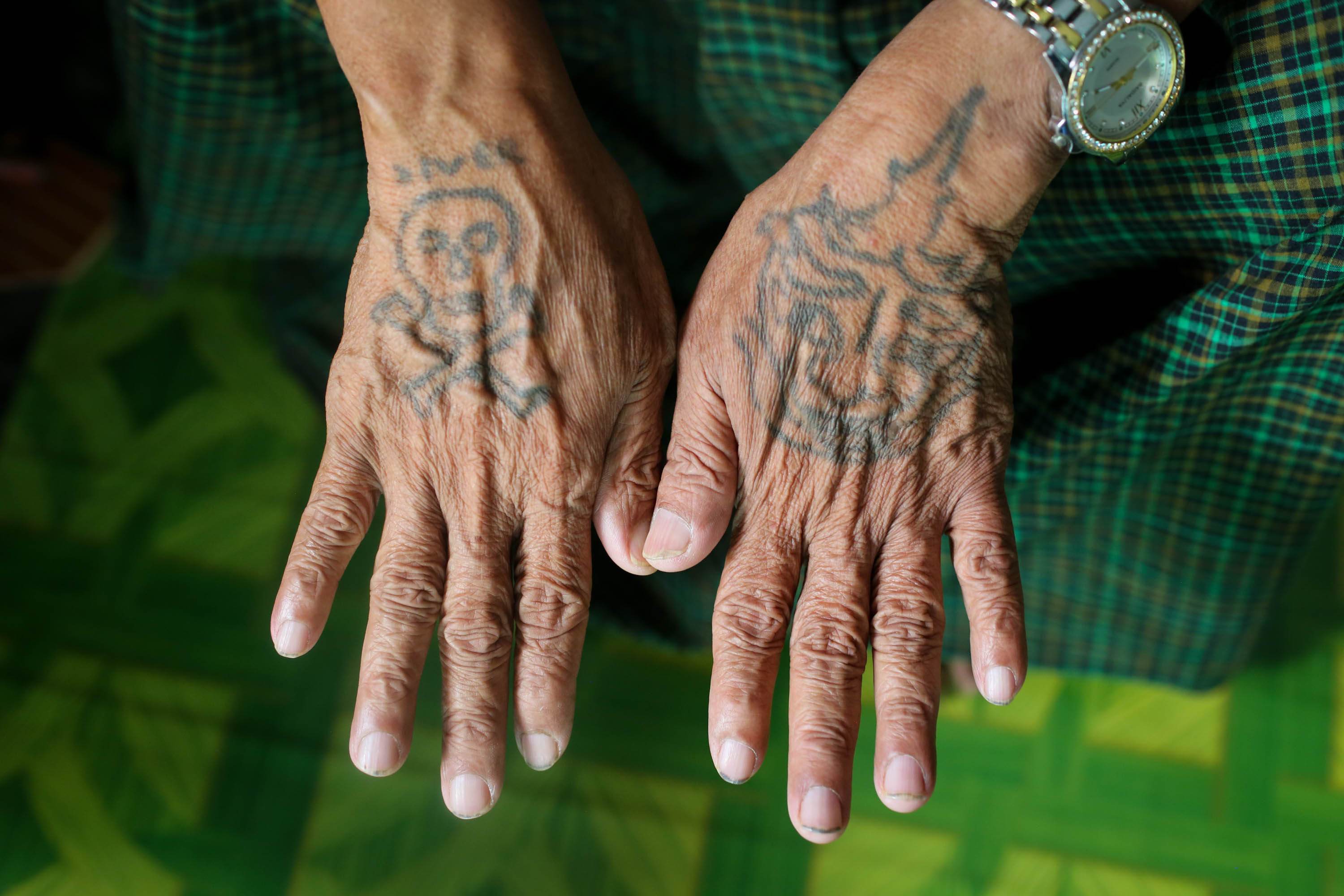 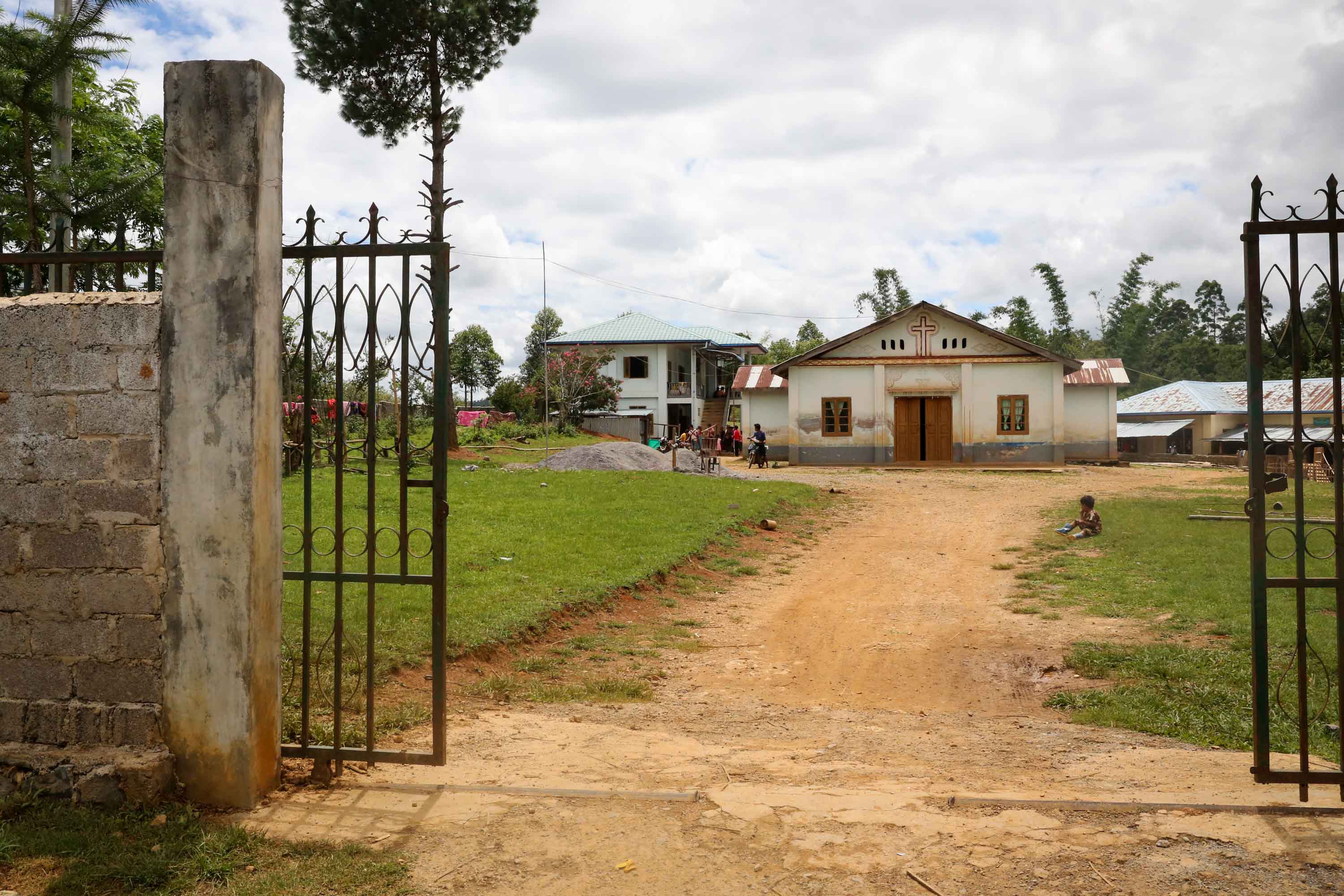 The church being used as an IDP shelter for freshly displaced Kachin villagers in northern Shan. There are 240 people who have fled the recent violence, many of them staying in the church and church office. This church is a 40-minute drive east from Kutkai, Shan State. (Kutkai, 22 June 2019) 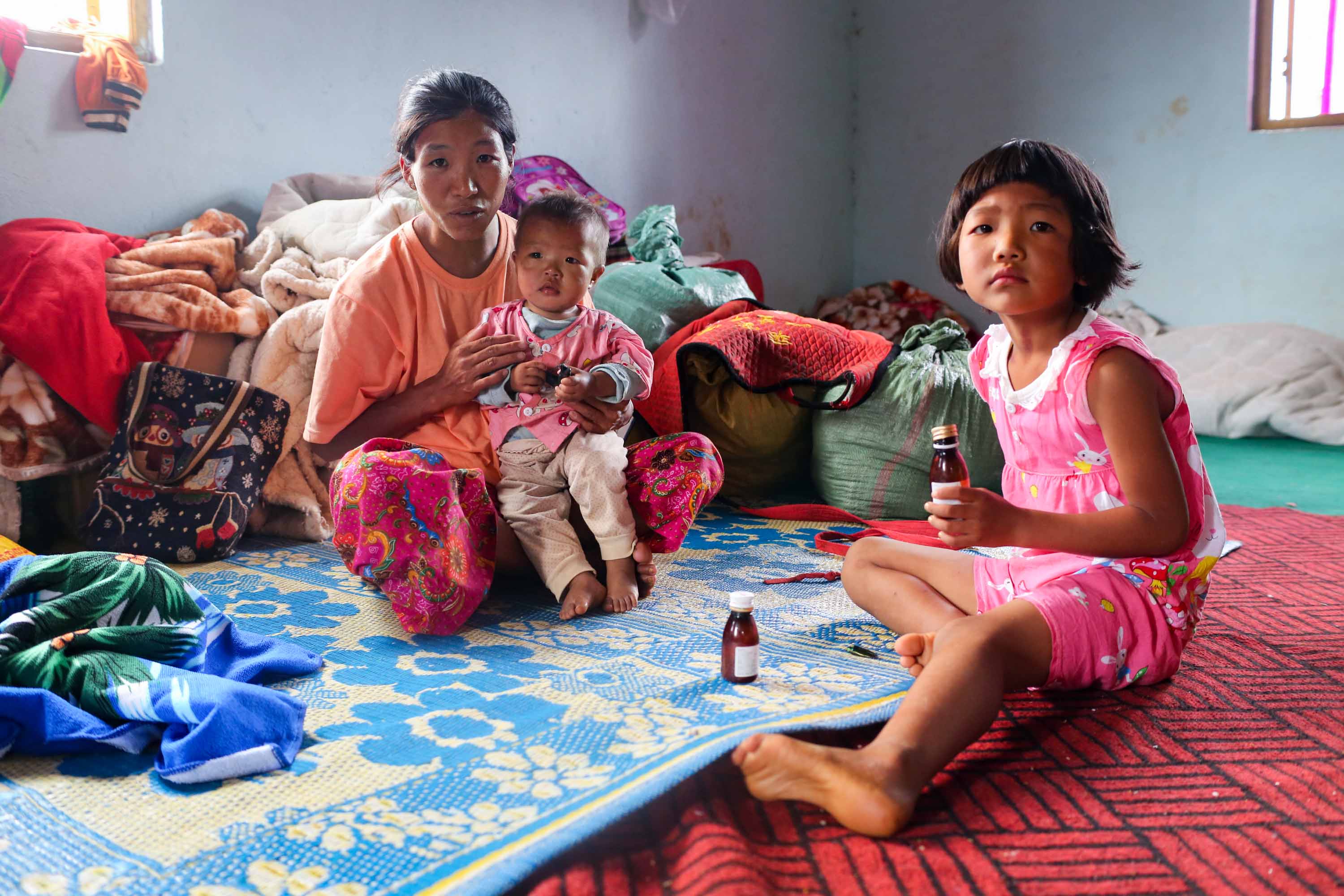 Women and children sit in Newly displaced IDPs sit in a Kachin church a 40 minute drive east of Kutkai, Shan State. The IDPs arrived a week earlier when fighting between the TNLA and Tatmadaw broke out around their village in Mo Hann. The IDPs said that the TNLA have been present in the village for the past eight months. (Kutkai, 22 June 2019) 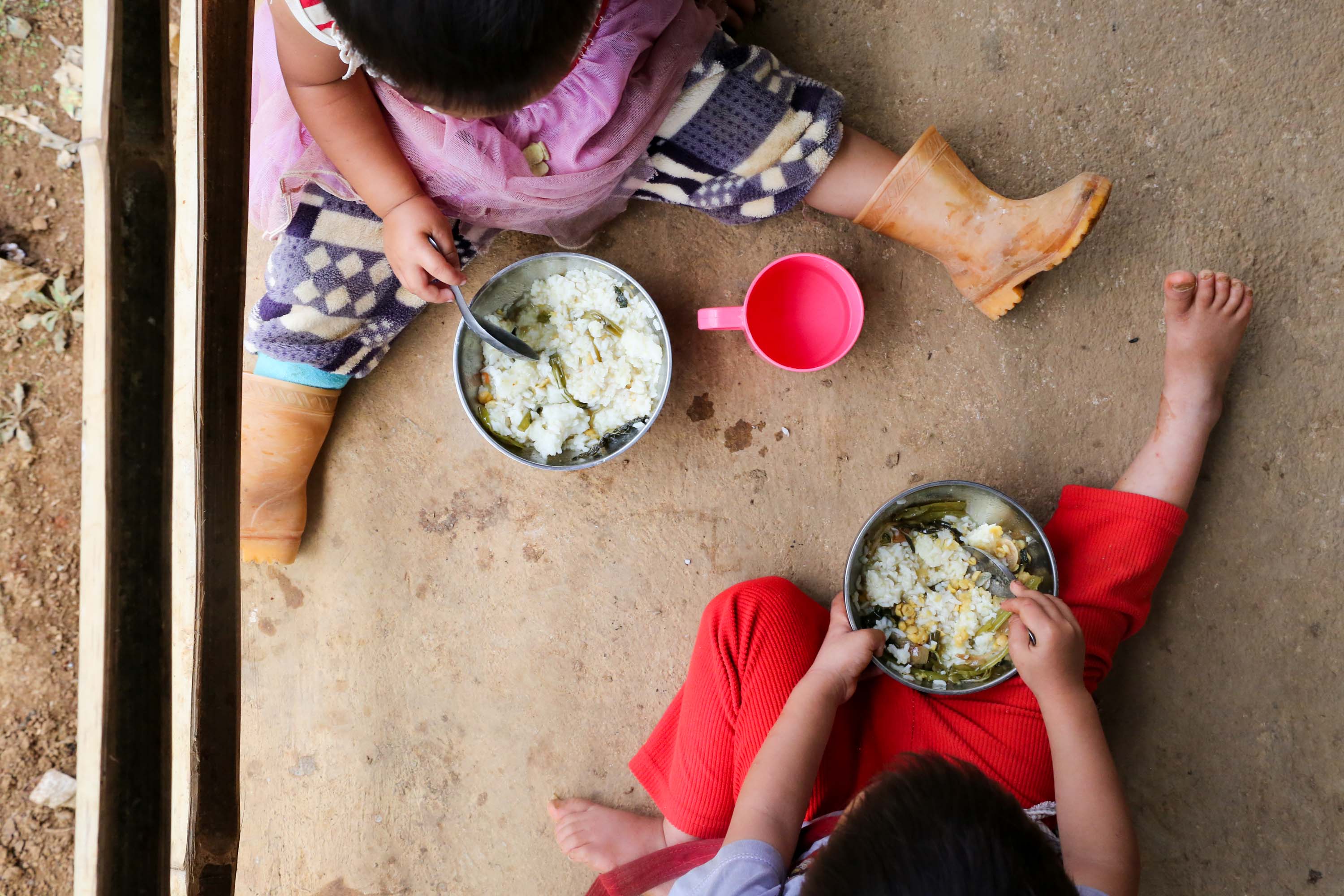 Children eat a meal made for the recently displaced IDPs staying in a Kachin church a 40 minute drive east of Kutkai, Shan State. (Kutkai, 22 June 2019)