The history that binds

Cambodia’s diverse mix of ethnic groups has helped to shape and develop the country’s rich architectural, religious and culinary landscape. While the Khmer are the most populous, highland ethnic groups and more recent Chinese, Cham and Vietnamese migrants point to Cambodia’s historic regional attraction. (The Cham are the Cambodian-Islam ethnic minority, who the ECCC also found to have been victims of Khmer Rouge genocide.)

Modern Cambodia is a product of empire. At its height in the 12th century, the Angkorian Kingdom covered an estimated 1 million square kilometres, and its capital at Angkor Wat was the most populous city in the world. Angkorian historical monuments can be found today as far away as Thailand’s border with Myanmar, across southern Vietnam, and in Laos.

The subsequent Angkorian decline, along with the expansion of neighbouring Thailand and Vietnam, saw these territorial claims shrink, culminating in 1863 with the designation of Cambodia as a French protectorate as part of the latter’s Indochina possessions. Large numbers of Vietnamese civil servants and bureaucrats were brought to Cambodia to assist in running French colonial affairs, and many stayed after independence from France was achieved in 1953.

In 1969, there were an estimated 400,000 Vietnamese residents in Cambodia among the country’s 7 million-strong population. Anti-Vietnamese violence in 1970, the year General Lon Nol came to power in a coup, saw the expulsion of 200,000 Vietnamese families and some 4,000 deaths by mob violence.

The defeat of Lon Nol’s government in April 1975 by the Khmer Rouge only worsened the plight of Cambodia’s Vietnamese residents. Even though the Khmer Rouge owed much of its early training and material support to their communist comrades in Vietnam, long-running hatred and suspicion quickly led to the expulsion of all, and slaughter of many, Vietnamese residents in Cambodia.

The long-awaited climax of the second part of the 2018 trial, finally found the surviving senior Khmer Rouge leaders Khieu Samphan and Nuon Chea at the Extraordinary Chambers in the Courts of Cambodia (ECCC) found the two defendants guilty (pending appeal) of genocide, crimes against humanity, and grave breaches of the Geneva Conventions of 1949. 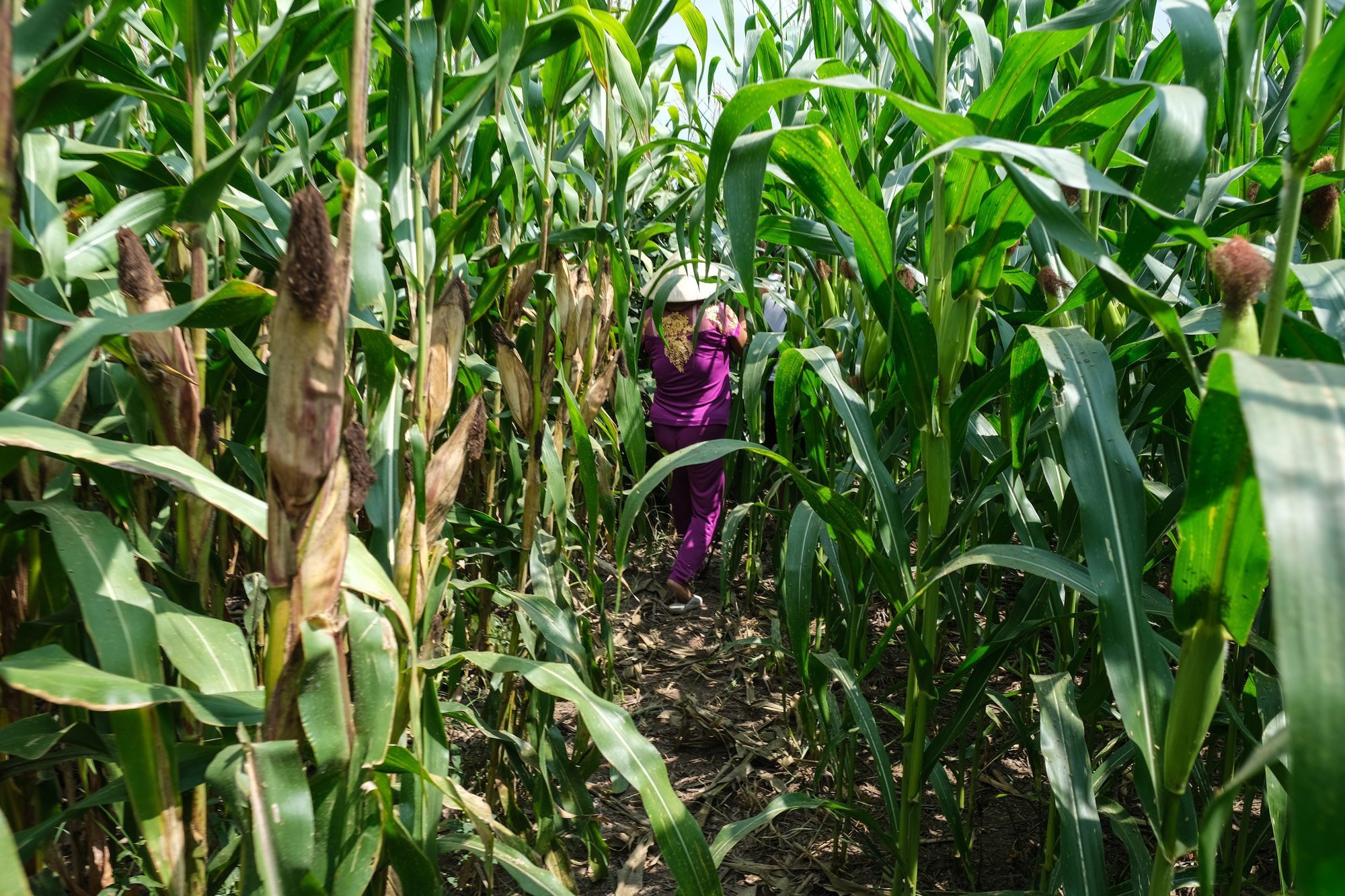 Shorn walks through the corn field behind her house leading to the burial site of her relatives. (Pak Nam, Cambodia, 9 February 2019)

“In each case, Vietnamese were targeted not as individuals but based on their membership of the group and their perceived ethnicity. This happened under the umbrella of the [Khmer Rouge] policy to specifically target the Vietnamese, including civilians, as a group. Until late 1976, the Vietnamese were targeted for expulsion, from April 1977, for destruction as such,” the Trial Chamber’s Summary Judgement states.

“[T]he evil Yuon race will be wiped off the face of the earth. And we Kampucheans [Cambodians] will be a happy people.” – Pol Pot

“And now, how about the Yuon? There are no Yuon in Kampuchean territory. Formerly there were nearly 1,000,000 of them. Now there is not one seed of them to be found.” – Khmer Rouge’s Revolutionary Flag magazine, April 1978

The Khmer Rouge were deposed in early 1979 in a large-scale intervention from the Vietnamese military, aided by Khmer Rouge defectors, including current Cambodian Prime Minister, Hun Sen, and other leading political figures. Between 1975 and January 1979, the population of Cambodia had dropped by an estimated 2 million people; the 20,000 murdered Vietnamese joining over 1 million Khmers, Cham and members of other ethnic groups who were killed under the Khmer Rouge due to starvation, overwork and lack of medical care.

Years of cross-border raids by Khmer Rouge forces during this period had severely tested the patience of now-unified Vietnam, and Vietnamese-led forces quickly gained control over much of Cambodia once their intervention began. However, pockets of Khmer Rouge resistance, especially along the Thai border where they received Western and Chinese support, lingered until the death of leader Pol Pot and the surrender of remaining Khmer Rouge leaders in 1998.

The return of relative normalcy to Cambodia, albeit under Vietnamese direction, led to the return of many of the Cambodian-Vietnamese families that had fled in 1975, and they were joined by many new Vietnamese migrants. The UN, which along with much of the international community did not recognise the new government in Cambodia and instead supported the mix of royalist, nationalist and Khmer Rouge groups along the Thai border, noted in a General Assembly meeting in 1983 that it was “[s]eriously concerned about reported demographic changes being imposed in [Cambodia] by foreign occupation forces.”

In the build-up to the UN-supported national elections in 1993 that followed the withdrawal of Vietnamese troops in 1990, Khmer Rouge units targeted Cambodian-Vietnamese communities in Cambodia, forcing families to flee again, this time closer to the border. Between 1992 and 1993, Amnesty International noted the death of some 130 Cambodian-Vietnamese in Cambodia, and injuries to 75 more, plus an unspecified number of missing, presumed killed.

Their report highlighted the hatred and suspicion among Khmer Rouge leadership of the Vietnamese in Cambodia, quoting General Nuon Bunno in 1992: “[B]ecause the yuon […] aggressor forces are still carrying on their aggression and occupation of Cambodia, while yuon immigrants are continuing to plunder land and farms of the Cambodian people, thus acutely antagonizing the Cambodian people.”

‘Yuon’ is the traditional Khmer word for Vietnam and Vietnamese, but it has taken on a derogatory and aggressive association in recent years and is disliked by the Cambodian-Vietnamese community. Leading contemporary Cambodian opposition figures, including party leaders of the now-banned Cambodia National Rescue Party (CNRP) like Sam Rainsy (who lives in self-imposed exile in France following a number of politically-motivated charges against him and has remained a vocal critic of the government), have defended using the word, as they seek to portray the government of Hun Sen – installed when Vietnamese troops controlled Cambodia – as puppets of Hanoi, and Vietnamese residents in Cambodia as a fifth column.

Whatever the academic arguments and historical precedence for its use, the Vietnamese community in Cambodia does not approve of the word, and Pak Nam residents grew visibly agitated when asked about it.

“It’s not easy to hear the word ‘yuon.’ It sounds offensive to me. [Talking] with friends no one would say it about each other, rather we would say ‘Viet.’ But thankfully we hear ‘yuon’ said less and less now,” Tho explained.

Current village residents also reported peaceful relations with their Khmer and Cham neighbours. Indeed, much of the anti-Vietnamese rhetoric has been directed from areas removed from the border, where interactions between Vietnamese and Khmer are often limited, explained Raymond Hyma, Regional Adviser for Cambodian human rights NGO, Women Peace Makers.

“We have a lot to learn from communities that are actually living in integrated settings and exposed to those [whom we think of] as different, or as ‘the other’ in our own contexts,” he said.

“Our listening work in the communities along the Cambodia-Vietnam border challenge many of our assumptions we hold from faraway Phnom Penh, where people often see the border as a dividing issue or as a hotbed of conflict. Although we certainly do hear about negative sentiment among different ethnic groups, we also find many more examples of integration and kinship in the everyday lives of Khmer, Indigenous, ethnic Vietnamese, Cham Muslim and other communities that live side-by-side,” said Hyma. There are some 15 different ethnic groups in Cambodia. 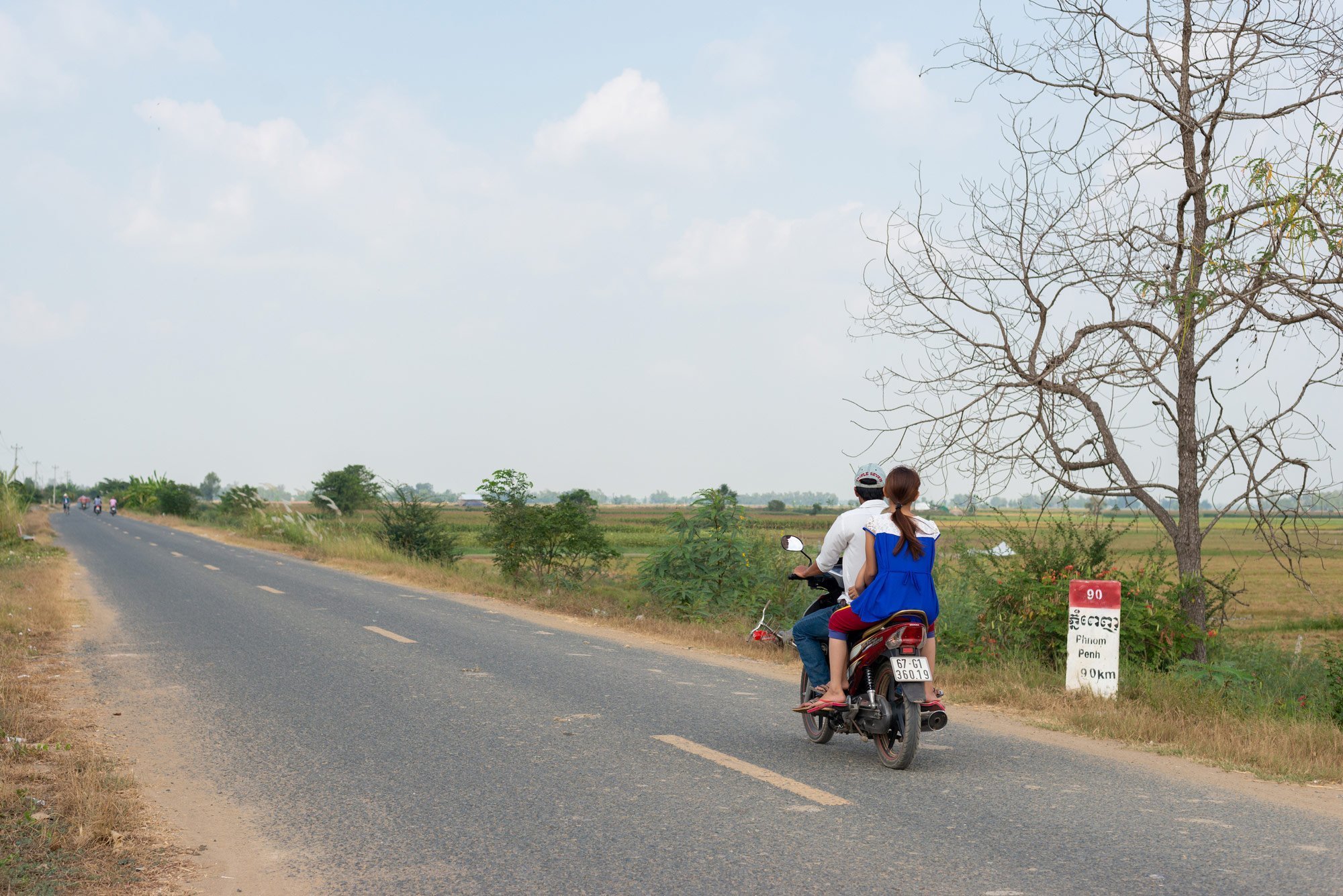 Van and his wife Lai have lived in Pak Nam since 1982. Both are Cambodian-Vietnamese and spoke of their pride at growing up in Cambodia.

“The Khmer Rouge made us leave Cambodia in 1975, and we lived in Tay Ninh Province, just over the border [in Vietnam]. In 1982, we got married, and then moved back to Cambodia, to Kampong Thom, then to here,” explained Lai while looking at her family’s fields from the covered veranda of her colourfully decorated home. She was born in a floating village on Tonle Sap Lake and spent much of her childhood on the water.

“We will apply for citizenship and the correct paperwork when we are allowed [in five years]. I want to have an official nationality,” she said with a proud smile.

Her husband is equally determined to live in Cambodia: “This is where we were born. It’s where we are from. I am Cambodian. Even without the paperwork, I still feel Cambodian.”