Long excluded from formal education, health and employment in Cambodia, the country’s Cambodian-Vietnamese community along the border have instead turned to Vietnam, often a short ferry ride away.

Many of the residents in Pak Nam are unable to converse easily in Khmer, a situation that is even more acute with the younger generations. Vietnamese beer brands, snacks and coffee packets are for sale in the local shops; shampoos and gels made by Vietnamese brands are in use in the village’s modest front-room hair salon; Vietnamese is the alphabet of choice for signs, calendars and mobile phones; and TVs and radios are all tuned to stations from across the border.

For 500 riel, or 3,000 dong (US$0.12), villagers can easily take the regular ferries that ply the Tonle Bassac River all day, without passing any formal border controls to enter Vietnam.

“We found small jobs to do, harvested soy to make ends meet [in Vietnam], but as soon as it was safe, we came back to Cambodia,” she recalled. While many of the expelled families returned to Cambodia, some chose to stay in Vietnam, where they continue to face the same issues of statelessness and lack of citizenship as they would in Cambodia.

“I speak Khmer well, but around here I speak much more Vietnamese. My daughter studied in Vietnam until Grade 5. She understands Khmer but can’t speak [it]. It makes me sad that she can’t speak Khmer,” she admitted.

Without birth certificates to prove citizenship, Cambodian-Vietnamese children across Cambodia have very limited access to formal education, and many parents of the Vietnamese community in Pak Nam send their children across the river into Vietnam each day for school.

Yet efforts are being made to boost educational provision on the Cambodian side of the border. A bilingual teacher who was recently hired by the small school at Pak Nam’s pagoda is providing the first formal Khmer lessons for many children in the area, explained Chan Sokha, Executive Director of the Cambodian NGO Khmer Community Development (KCD), which has long worked with children along Kandal Province’s border with Vietnam to ensure access to education for all.

“It is very important that both Khmer and ethnic Vietnamese children can share education in the Khmer school system. Through learning together, both of them can understand the [different] culture and this […] will reduce the prejudice and discrimination from the Khmer children to the Vietnamese children. If both of them are understanding, it will [allow for] good collaboration for business [purposes or] any development in their community,” she said. 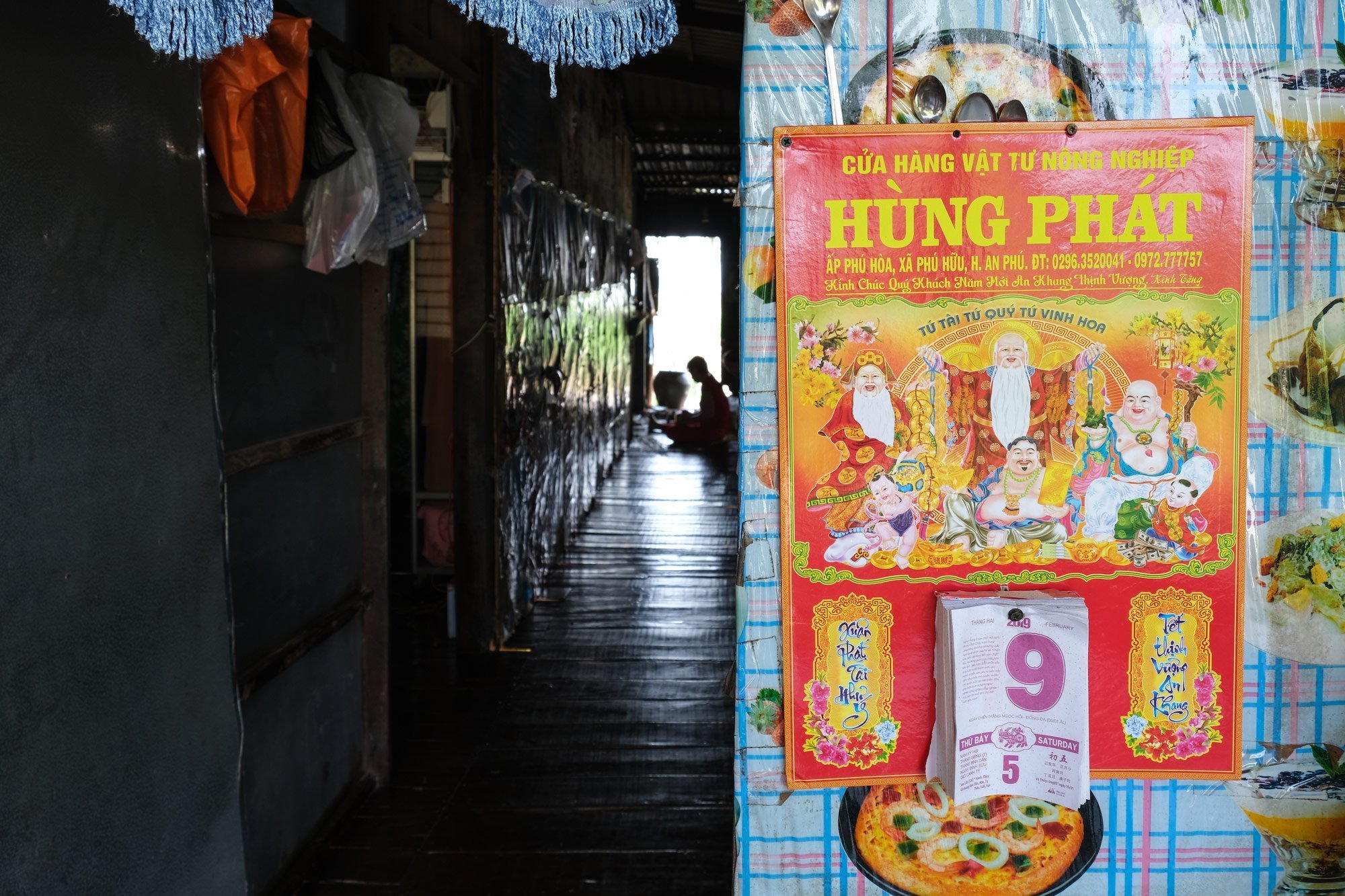 A calendar in Vietnamese on the wall of Van and Lai’s house in Pak Nam village. (Pak Nam, Cambodia, 9 February 2019) 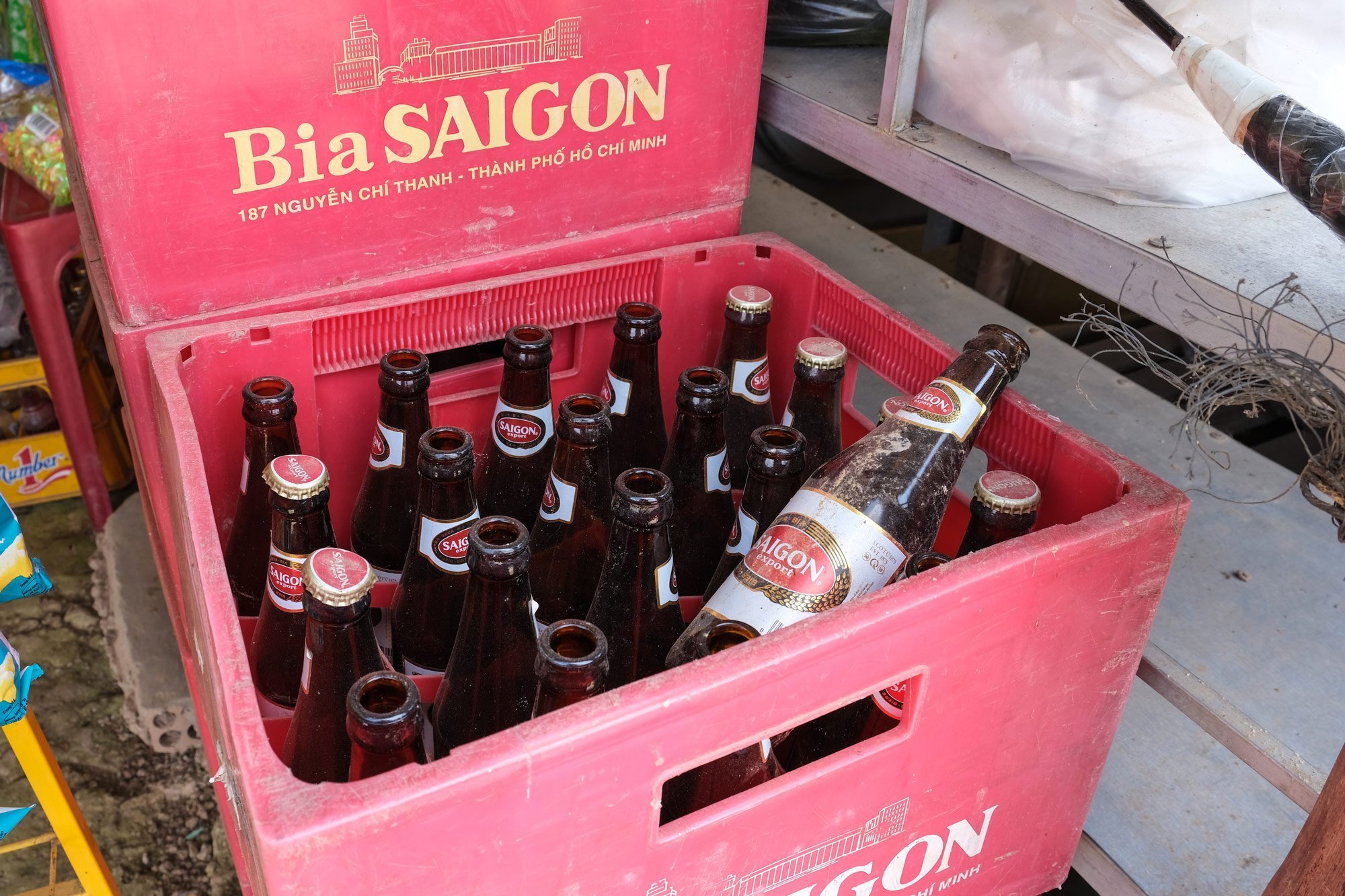 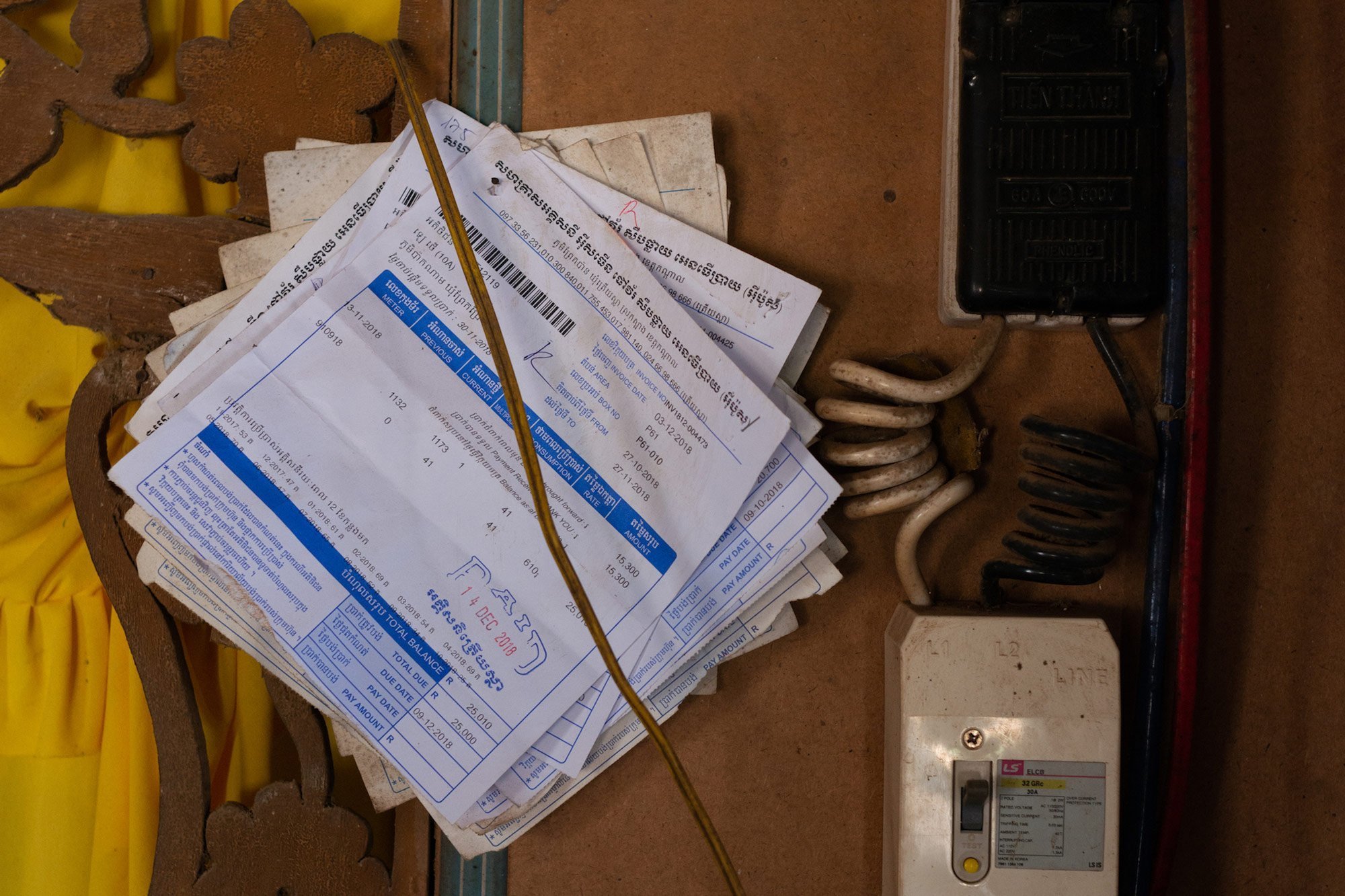 A Cambodian electricity bill on the wall of a Pak Nam house, some of the only Khmer script seen in the village. (Pak Nam, Cambodia, 9 February 2019) 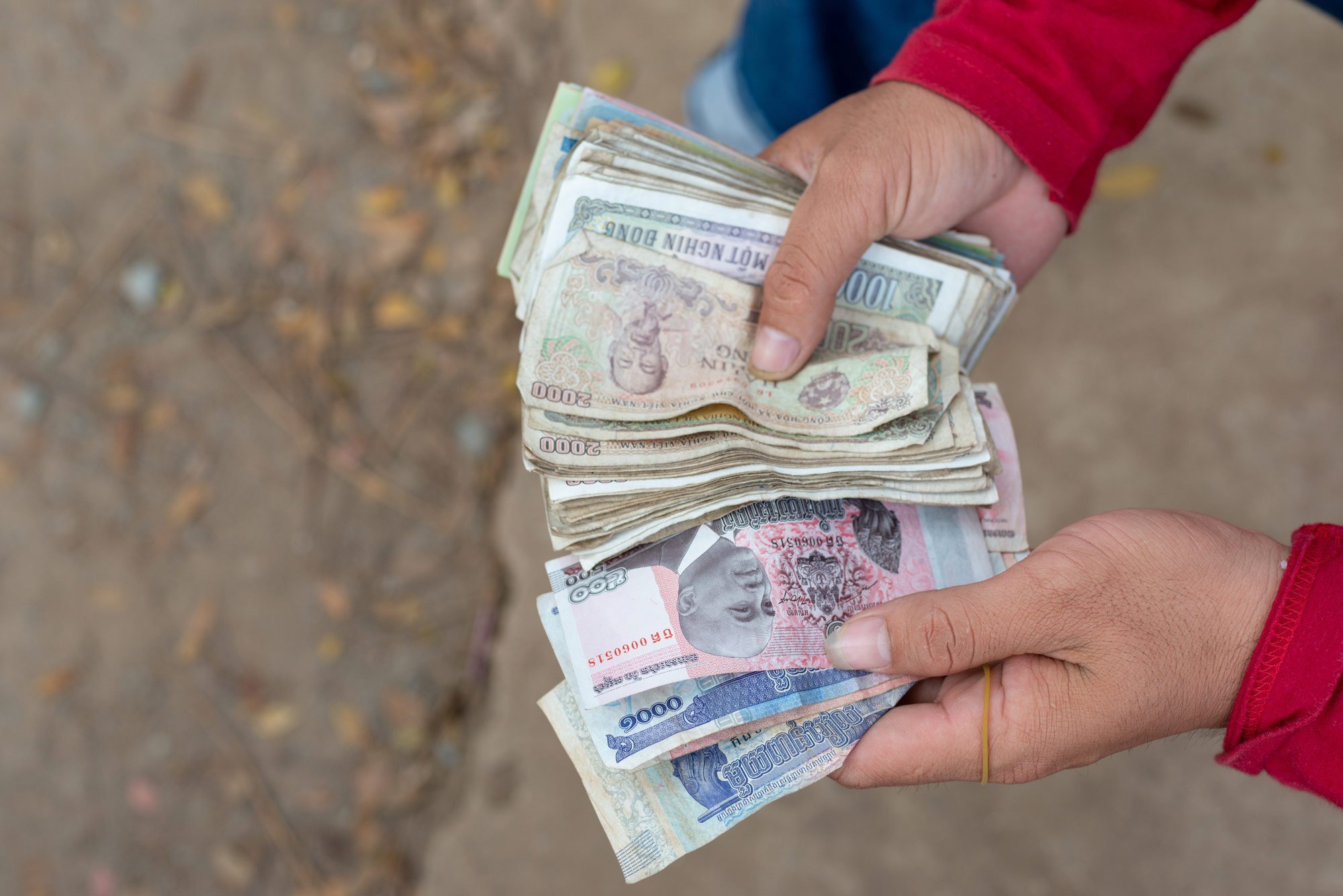 Cambodian and Vietnam currency are both accepted for the border ferries. (Pak Nam, Cambodia, 9 February 2019) 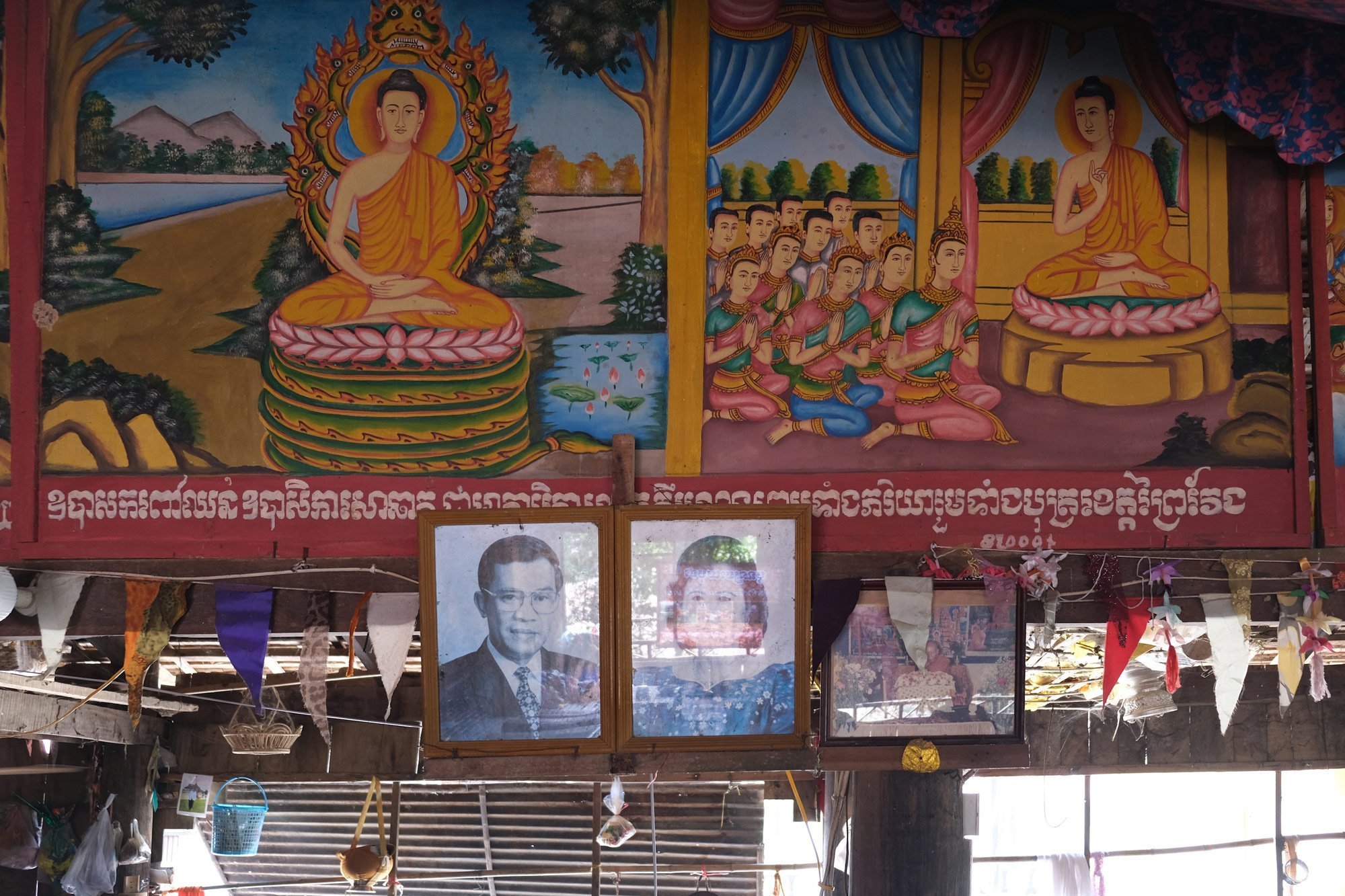 Images from Buddhist history and Khmer writing, and old portraits of Cambodian Prime Minister Hun Sen and his wife Bun Rany, adorn the small pagoda in Pak Nam village (this is the only “traditional Cambodian” building in the village). (Pak Nam, Cambodia, 9 February 2019)

Government primary schools in Pak Nam and Khna Tang Yu villages, both of which have large populations of Cambodian-Vietnamese residents, offer classes in Khmer for children. While NGOs such as KCD offer educational support outside of the formal education sector, the only option for many children with little or no Khmer language understanding is to continue to study in Vietnam.

Eligibility is another issue, but one that is less of a restraint near the border than in other areas, Sokha noted.

“In Prek Chrey, Pak Nam and Khna Tang Yu primary schools, it seems a bit more open, and they can access school without [Cambodian] birth certificates, but they only can access primary school, and it is an informal learning environment,” she added.

The reality for most Cambodian-Vietnamese students is that, although they call Cambodia home, they will end up working either for Vietnamese companies, or largely with fellow Vietnamese speakers, and convincing parents and students of the importance of learning Khmer is, therefore, a challenge for the KCD team, Sokha admitted.

At present, almost all of the educational, health, employment and shopping needs of residents in this border area are met in Vietnam, which is more densely populated and home to more developed services and infrastructure.

According to Cambodia’s 2008 national census (the delayed 2018 national census is due to begin in March 2019), 0.54% of respondents listed Vietnamese as their mother tongue. Of the 13.4 million Cambodian residents at the time, that would suggest at least 70,000 people identified as Vietnamese speakers.

With Cambodia’s population now at roughly 16 million, and assuming self-identified Vietnamese speakers have remained a similar percentage, that would mean a minimum of 80,000 Vietnamese-speaking residents, and possibly many more who chose to list Khmer to be less conspicuous, or were not included in the 2008 census at all.

For Pak Nam resident Shorn, the desire to live in Cambodia is strong.

“My father was Cambodian-Vietnamese, my mother Khmer, so in my heart, I am both,” she explained. Despite these legitimate claims to Cambodian citizenship under the Law on Nationality, she remains without citizenship and only has her new Cambodian residence card, which she received in 2016.

“Life here is fine. I can sell my corn in Vietnam, go to the market for shopping. Nothing is wrong,” Shorn said.

In the cornfield behind her house, the graves of her parents and other relatives, complete with Vietnamese inscriptions, highlight her attachment to the land.

“I wouldn’t live anywhere else, my parents are buried here.” 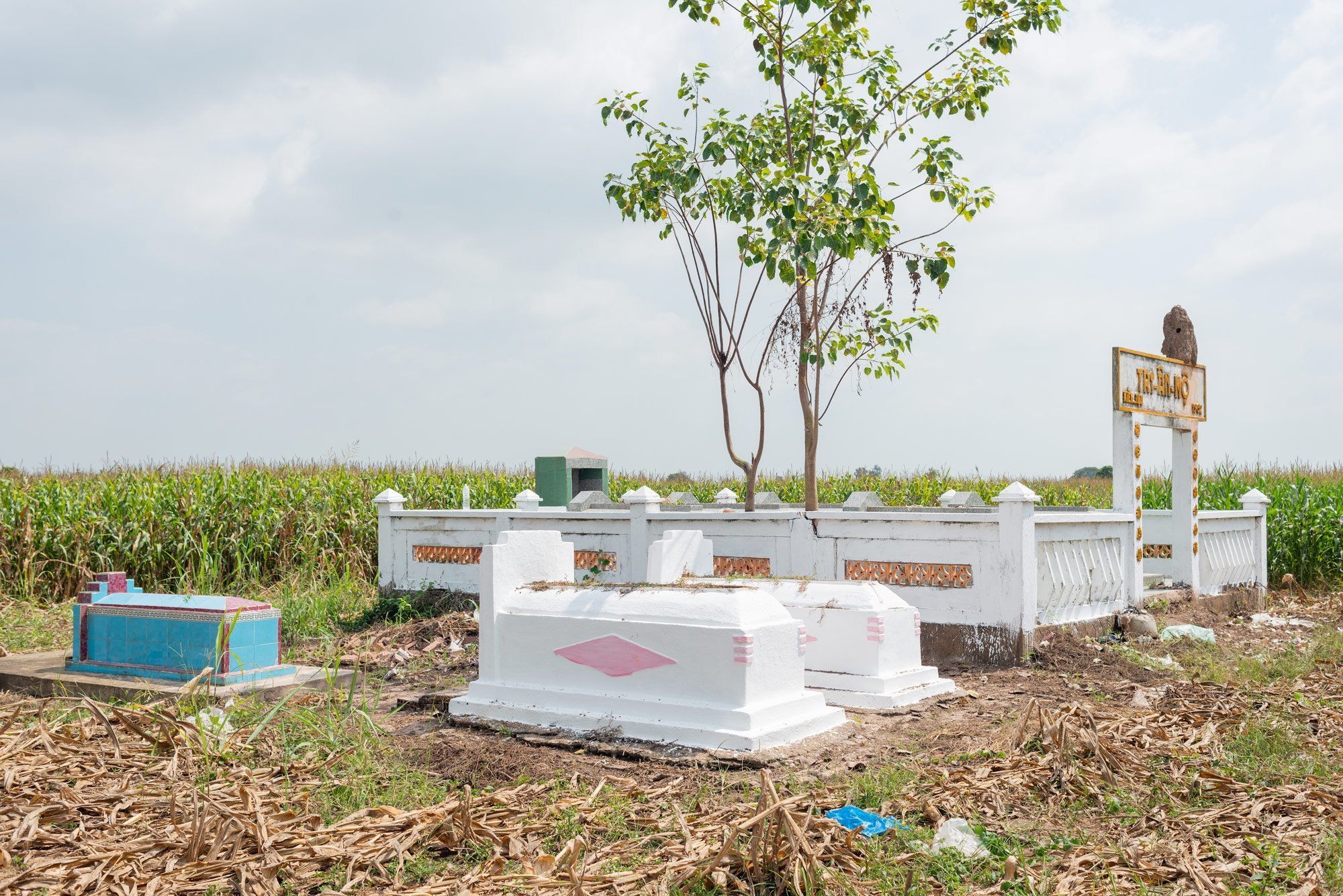