How can peace be achieved?

On the afternoon of 12 May 2018, police filled the streets of central Yangon, beating protestors with batons and dragging people into police wagons. Even as they were dragged away—sometimes by the throat—the protestors kept yelling, “We want peace!” 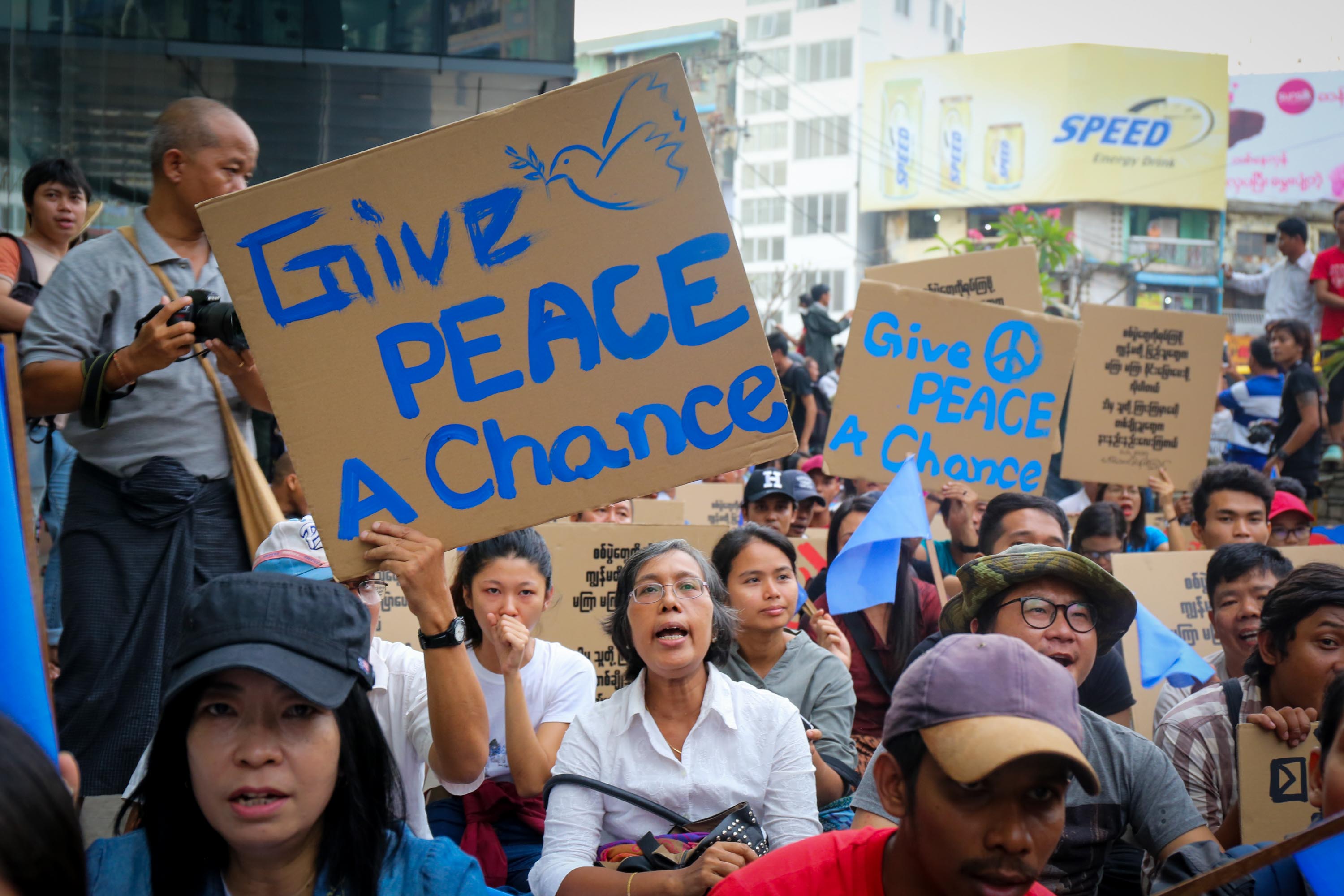 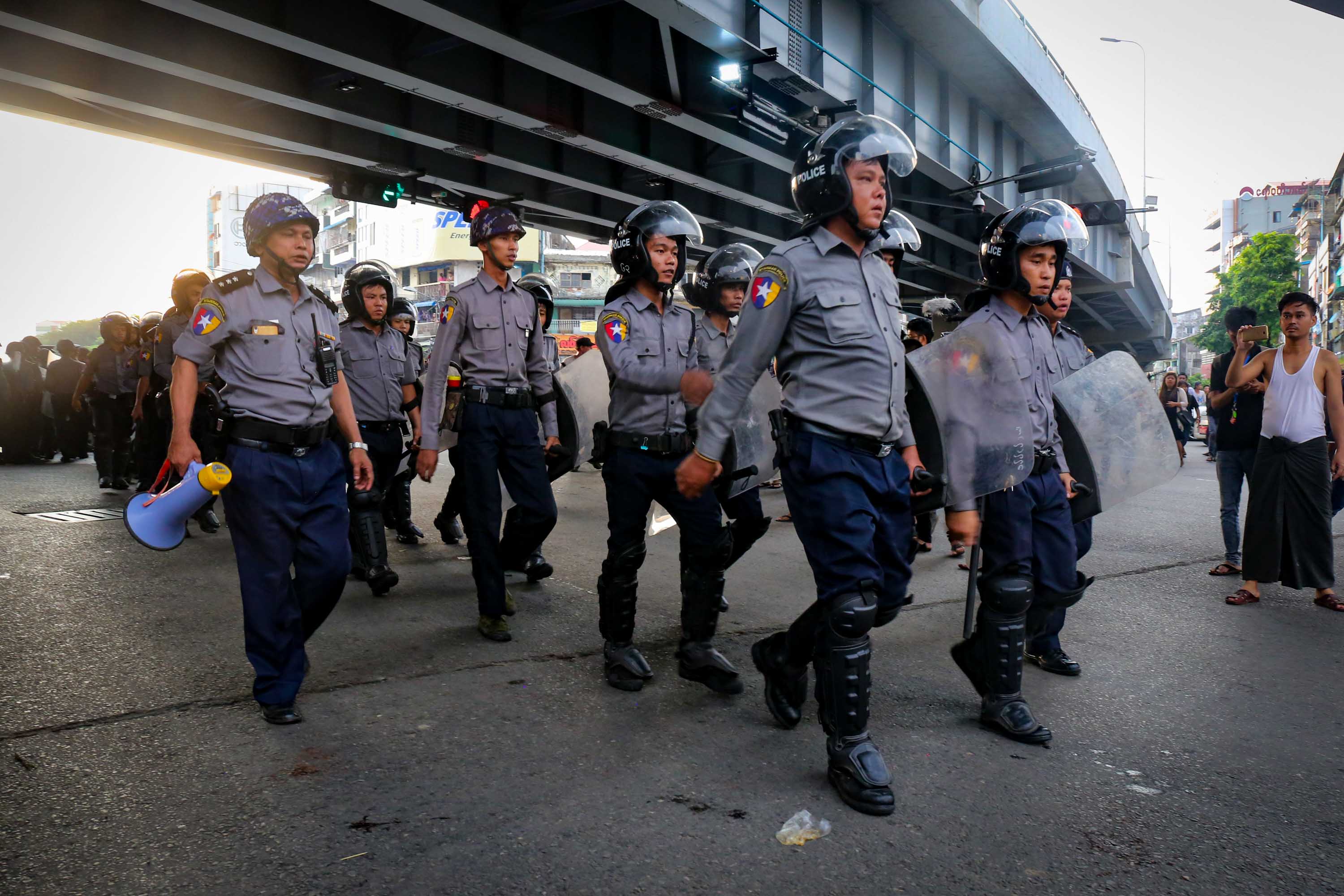 The demonstration, which had thousands of attendees, mirrored many others across Myanmar that month. People took to the streets to express growing frustration over human rights abuses in ethnic states entrenched in the country’s decades-long civil war.

“What we [youth groups] realised was that the government isn’t actually doing what they said they would do. It seems like they’re just doing things for show,” said youth activist and 12 May protestor Thinzar Shunlei Yi, discussing the government’s campaign promises to bring peace and equality to all residents of Myanmar. “So we decided that we had to do things on our own and bring our message of peace to the people ourselves.”

Upon taking office in March 2016, the NLD announced a plan to hold peace talks, dubbed the “21st Century Panglong Union Peace Conferences,” in reference to the original 1947 Panglong Conference, twice a year.

But from the start of the first conference, held in August 2016, there were issues. Armed organisations such as the Ta’ang National Liberation Army and Arakan Army were not invited to participate, and fighting continued in Kachin and Shan states while the conference was held.

After several postponements, the second and third conferences were held, each making less headway than the previous one. By the third conference, armed groups such as the Karen National Union and Restoration Council of Shan State had withdrawn, citing the failure to meaningfully implement agreements that had been made.

“It’s amazing to see how the hopes from the October 2015 Nationwide Ceasefire Agreement signing have subsequently led to new lows in trust over and over again as the military prevented implementation of the agreement,” independent legal consultant Jason Gelbort said. “And that makes it very unattractive for other groups to also participate in the NCA process, especially as there are ongoing Tatmadaw offensives and abuses against civilians.”

One of the main roots of the problem, Gelbort said, is that the desired outcomes of the military and ethnic organisations are entirely different, leading to a stalemate in the negotiation process.

“Ethnic armed organisations, ethnic communities, and community service organisations want to transform the structure of the state and don’t accept the legitimacy of the 2008 constitution,” he said. “They want to negotiate how the union will look in the future; how power will be divided and rights will be protected.”

Meanwhile, in the eyes of those directly involved in the peace negotiation process, the military desires the opposite.

“[Commander-in-Chief] Min Aung Hlaing wants only one army in the country, he wants to disarm us. We agree one army would solve political problems, but the problem with surrendering arms is the right of succession,” said Sao Hso Ten, the patron of the Shan State Progress Party/Shan State Army. “[He] said that we must never secede, but the right to secede is our birth right.”

The right to secede that Sao Hso Ten mentions goes back to the original Panglong Agreement signed between Aung San and ethnic leaders in 1947, which would have granted ethnic groups greater autonomy from the Union-level government. Yet with the assassination of Aung San and eventual military junta takeover, the agreement was never fulfilled.

But in order to amend Myanmar’s constitution, more than 75% of the 440 parliamentarians must vote in favour of an amendment. This is almost impossible, as the current constitution automatically grants the military 100 seats, or 25% of parliamentary seats, under notorious Article 436.

“Min Aung Hlaing said it’s time to stop the armed struggle, abolish our armed group, and join parliament, but Aung San Suu Kyi can’t beat Article 436, so how can things change?” Sao Hso Ten asked. “So we have come to know that if we do not take up arms, we can’t be liberated.” 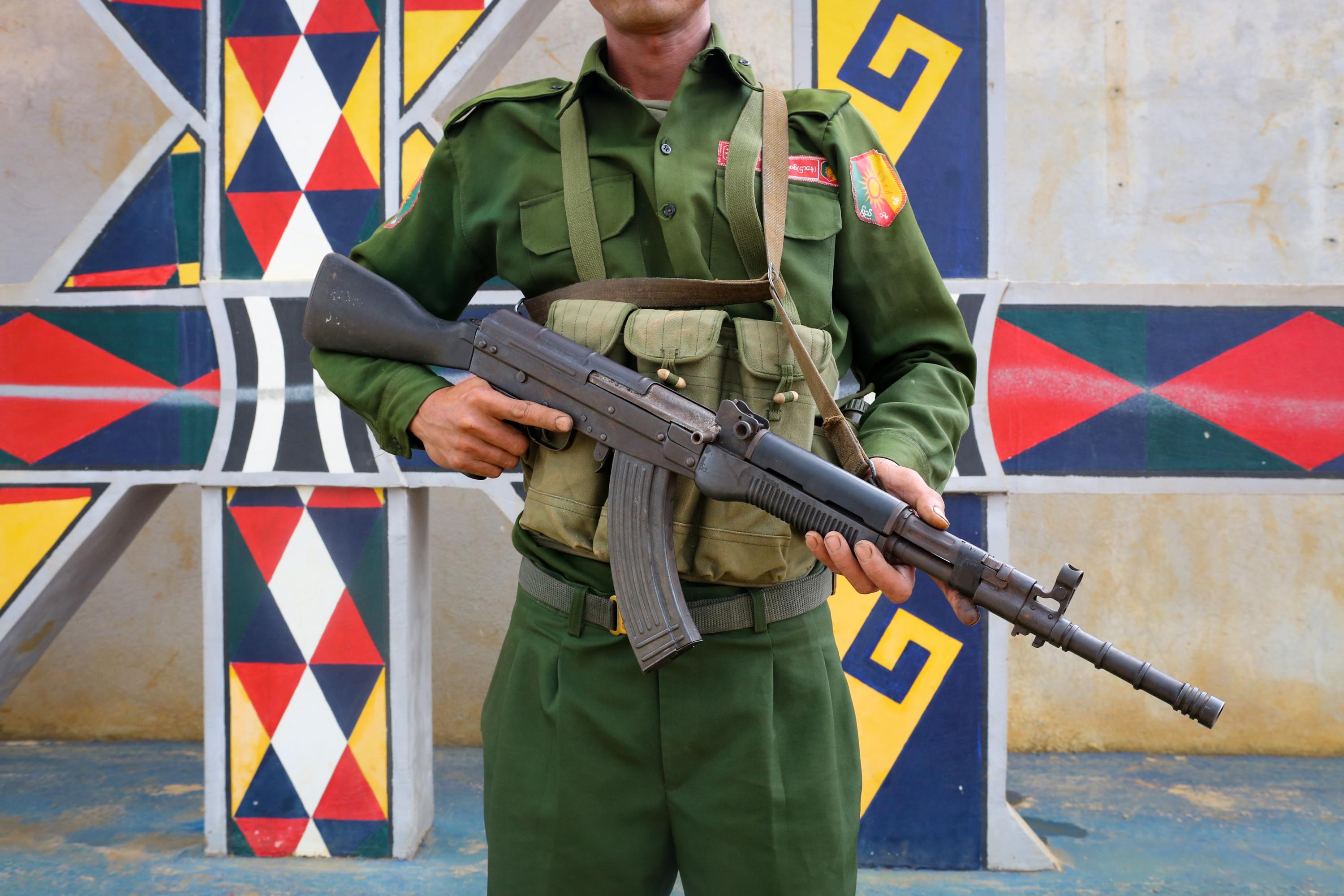 A Kaung Kha militia member stands in front of the town’s manau, colourful structures that signal a traditional gathering place. The village-a 40-minute drive from Kutkai-is completely controlled by the militia. (Kutkai, 22 June 2019) 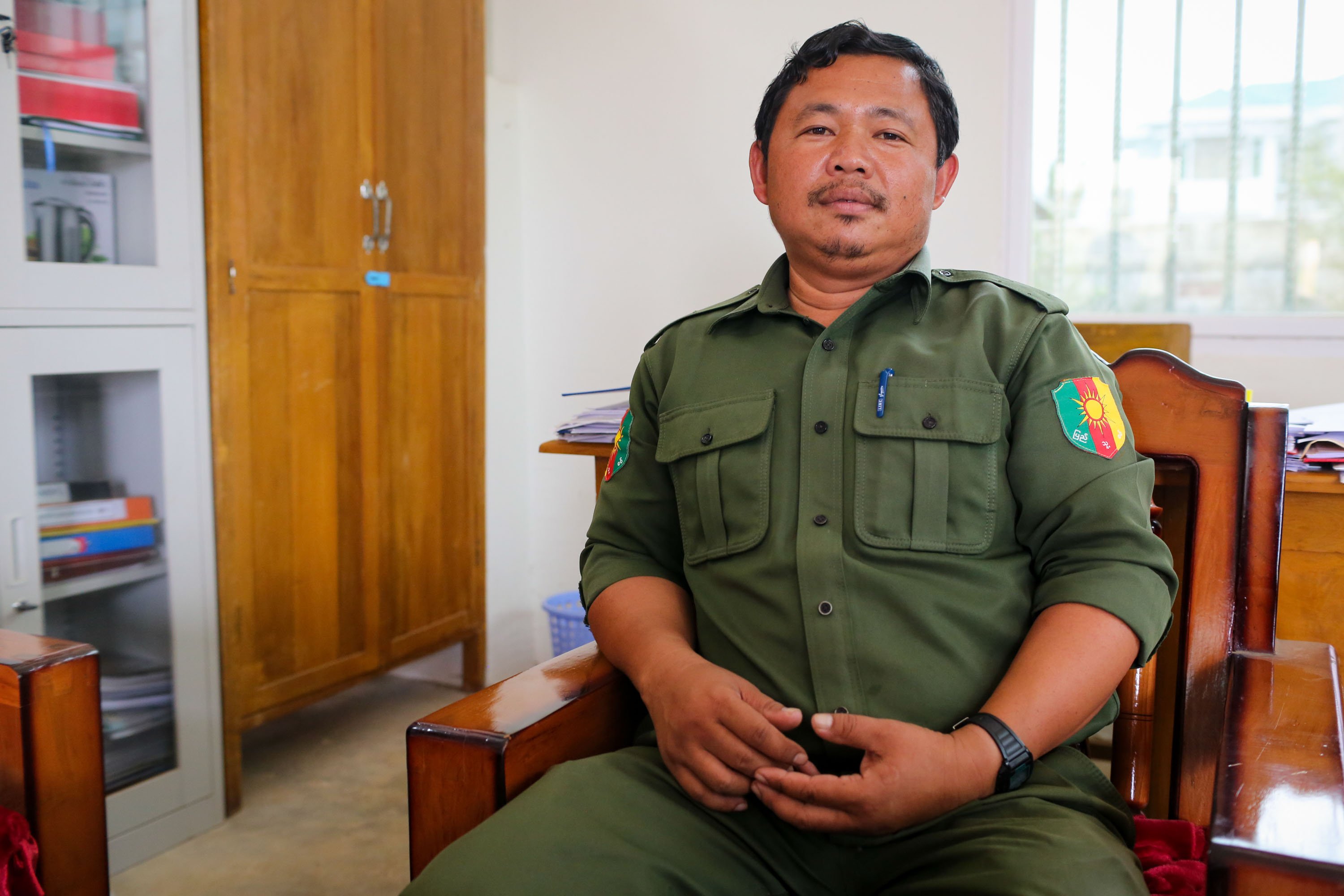 Major General, Zawn Lum, of the Kaung Kha militia, sits in an office in their headquarters outside Kutkai, Shan State. (Kutkai, 22 June 2019) 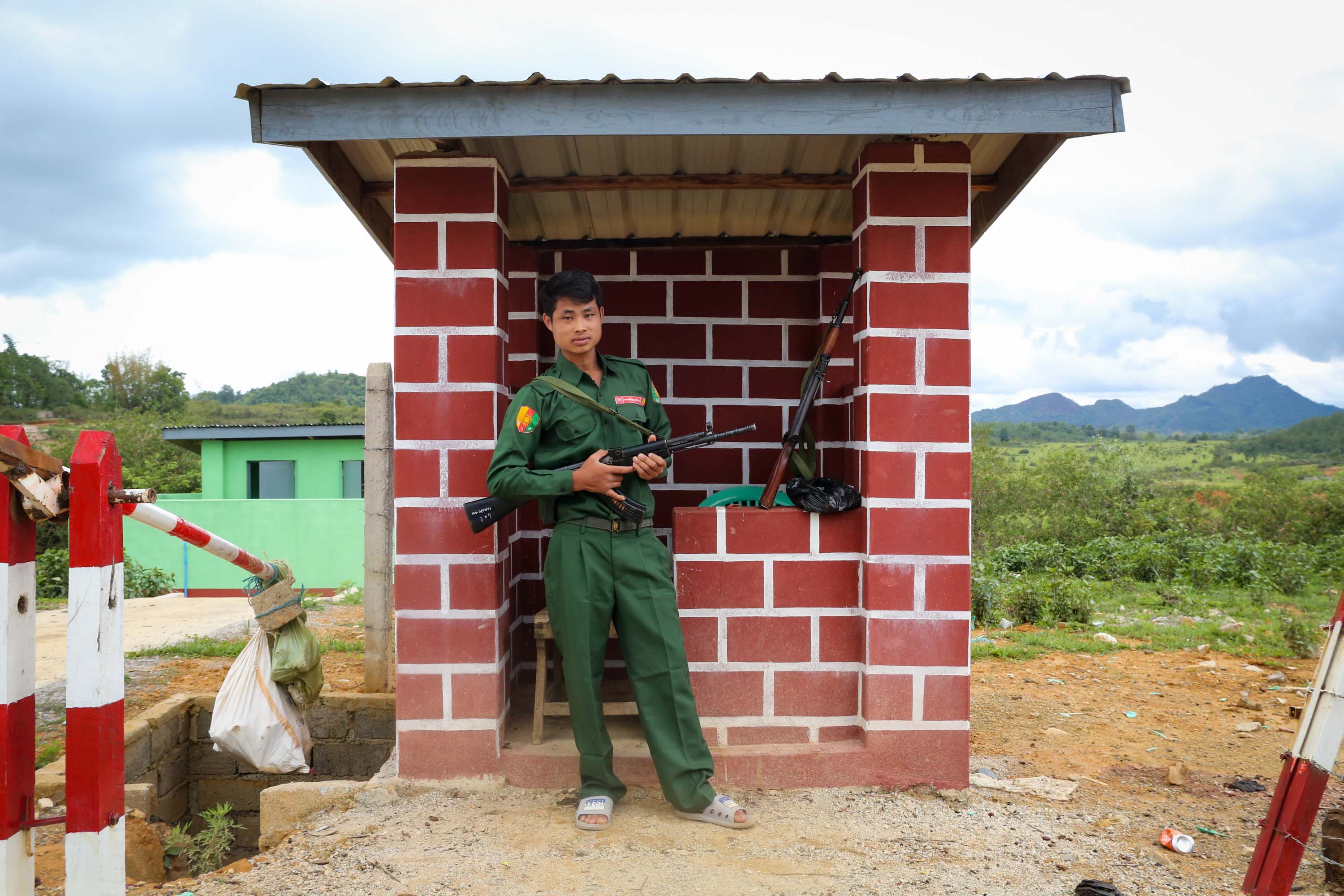 A guardsman stands at the entrance of the Kaung Kha militia village and headquarters. (Kutkai, 22 June 2019)

“The Tatmadaw is the greatest impediment to Myanmar’s development as a modern democratic nation,” said Marzuki Darusman, chair of the United Nations Independent International Fact-Finding Mission on Myanmar, in a press release from the OHCHR. “The Commander-in-Chief of the Tatmadaw, Min Aung Hlaing, and all the current leadership must be replaced, and a complete restructuring must be undertaken to place the Tatmadaw under full civilian control. Myanmar’s democratic transition depends on it.”

In December 2018, the Tatmadaw announced a ceasefire in five regional commands in an attempt to resuscitate the peace talks, which was praised by the local and international community.

In the wake of slow progress at the Union levels of government, ethnic grassroots organisations have come together to advocate for their communities, providing aid, conducting human rights violation documentation, and educating youth about leadership and democracy.

“If we don’t help our people, who will?” wondered Lway Poe Kamaekhour, a leader of the Ta’ang Women’s Association, which provides aid to war-torn Ta’ang ethnic communities in northern Shan State and regularly appeals to the Tatmadaw for peace in their region.

As seen with the protests that have taken place across Myanmar over the past year, the call for peace—or steps towards peace, such as abolishing  article 436—is gaining momentum, especially among young people.

“It seems like [the government] is measuring peace by the number of conferences they have, and that’s not a good measure,” said Thinzar Shunlei Yi. “We [youth] think there has to be a strong ground consensus and recognition of what the people want, and right now there is no recognition. How can peace be achieved if we are not included in the peace process?”

Until there is recognition of ethnic and youth voices across the country, groups will continue to organise and take advocacy into their own hands, Thinzar Shunlei Yi said.

“We will make sure our voices are heard until there is finally peace.”