Eighty kilometres from the Chinese border, nestled in the lush green mountains of Myanmar’s northeastern Shan State, is Namtu, a British colonial-era mining town known for its silver and lead mines. But more recently, Namtu has become notorious as Shan’s epicentre of conflict between the Tatmadaw, ethnic armed organisations, and various Tatmadaw-aligned groups, all of which operate with near-total impunity, with civilians often caught in the crossfire. 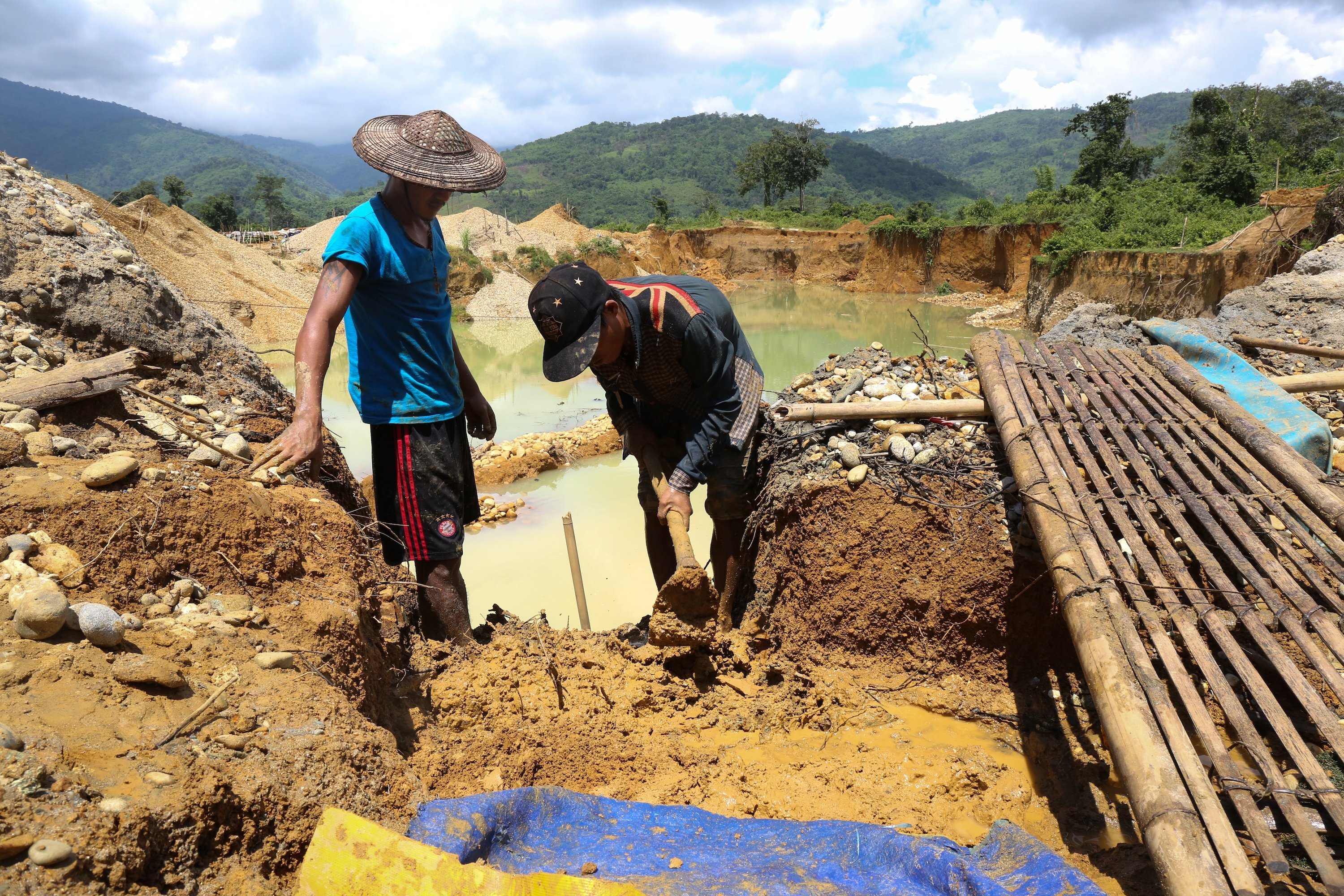 Illegal miners search for gold in a mine shut down due to the Myitsone Dam project. The miners use mercury to amalgamate and recover gold from sediment. (Myitsone, Kachin, 13 August 2016)

Many of the people displaced by this conflict—which are some of the more than 401,000 IDPs in Myanmar, according to the Internal Displacement Monitoring Centre —have lived in camps since renewed fighting between the EAOs Restoration Council Shan State (RCSS), Shan State Progress Party (SSPP), Ta’ang National Liberation Army (TNLA) and the Tatmadaw in 2016.

Many residents of the camps have horror stories of what they’ve lost in the conflict, including their homes, family members, friends and, for some, hope for ever experiencing lasting peace.

La See sits in his makeshift home in Lisu Church camp in Namtu, which is now home to more than 200 IDPs. La See says he moved to the camp in 2016 at his father’s request.

“He didn’t want to lose anymore children,” he said. 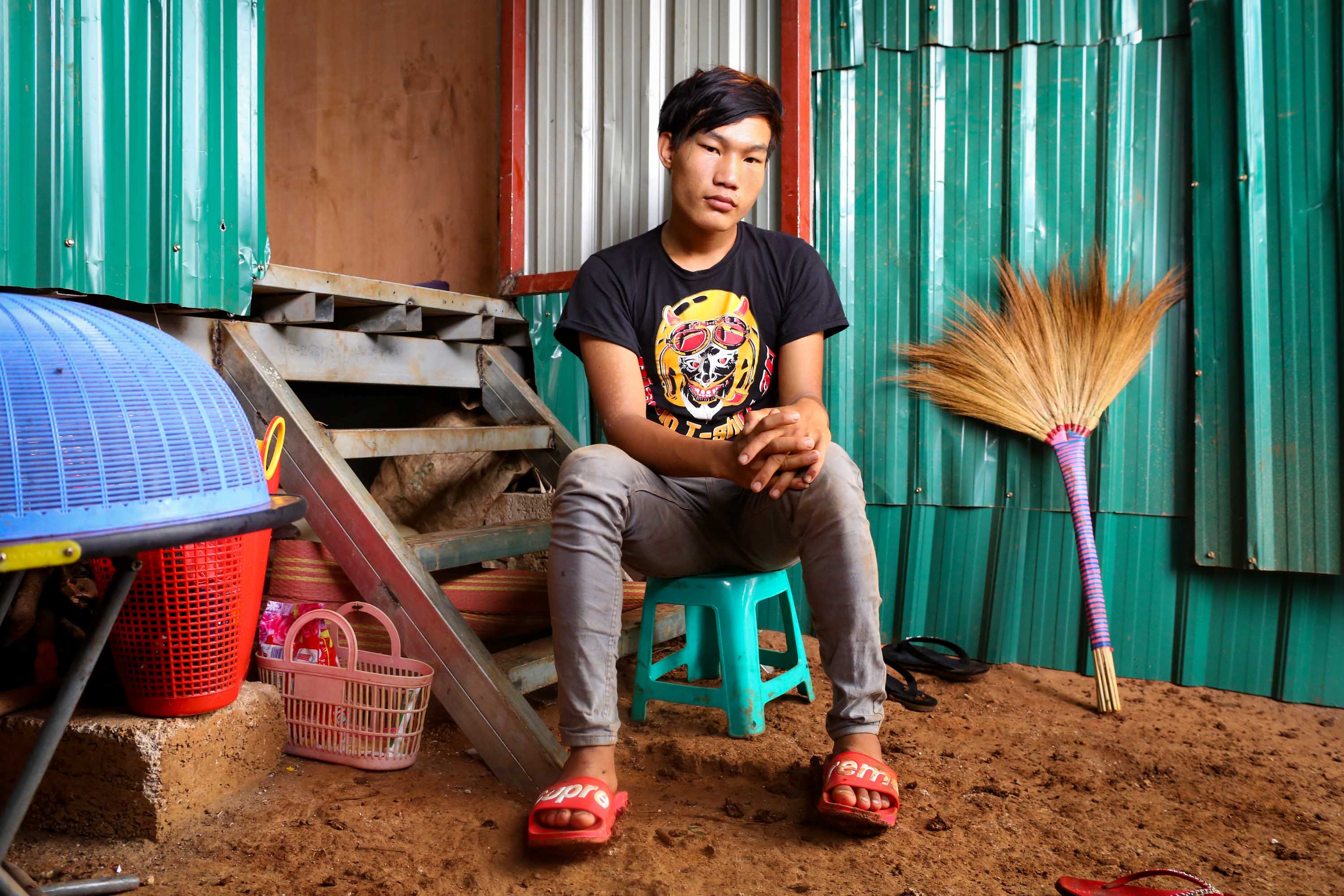 La See, a Lisu Church IDP camp resident, sits in his family’s new home in the camp. La See had family members go missing last year after they went to purchase rice in a neighbouring village. La See says he has received information the family members were arrested by RCSS. He has not heard from them since they were arrested. (Namtu, 19 June 2019)

La See recalled the week his two older brothers, as well as several other villagers, went missing on 18 June 2016, after leaving their village to buy rice from the market in neighbouring Namtu.

At that time, conflict between ethnic groups had escalated, with different EAOs controlling villages throughout the area.

“The [RCSS] warned villagers not to have more than one pyi (2.13kg) of rice,” La See said. “That way we wouldn’t be able to give rations [to the other EAOs].”

La See said his family never returned, and his remaining family members began to fear that the RCSS had arrested them, as the group had been making arrests in a nearby village days before.

“To this day I have no idea if they are alive or dead. Even as a family member, I have not received any information,” he said. “I assume they’re dead, but even now I have no idea.”

And as it has been in Myanmar for decades, civilians often continue to face intimidation or violence from the Burmese military as well.

Sai Myint Mon, whose brother, Sai Tint Cho, was serving as a village administrator in northern Shan’s Kyaukme village at the time of his arrest, has been in a detention center since his 26 April arrest, accused by the Tatmadaw of collecting taxes for the RCSS.

“My brother was doing what he had to do, this is how life is in this area,” Sai Myint Mon said. “If you say no, you will be killed.” 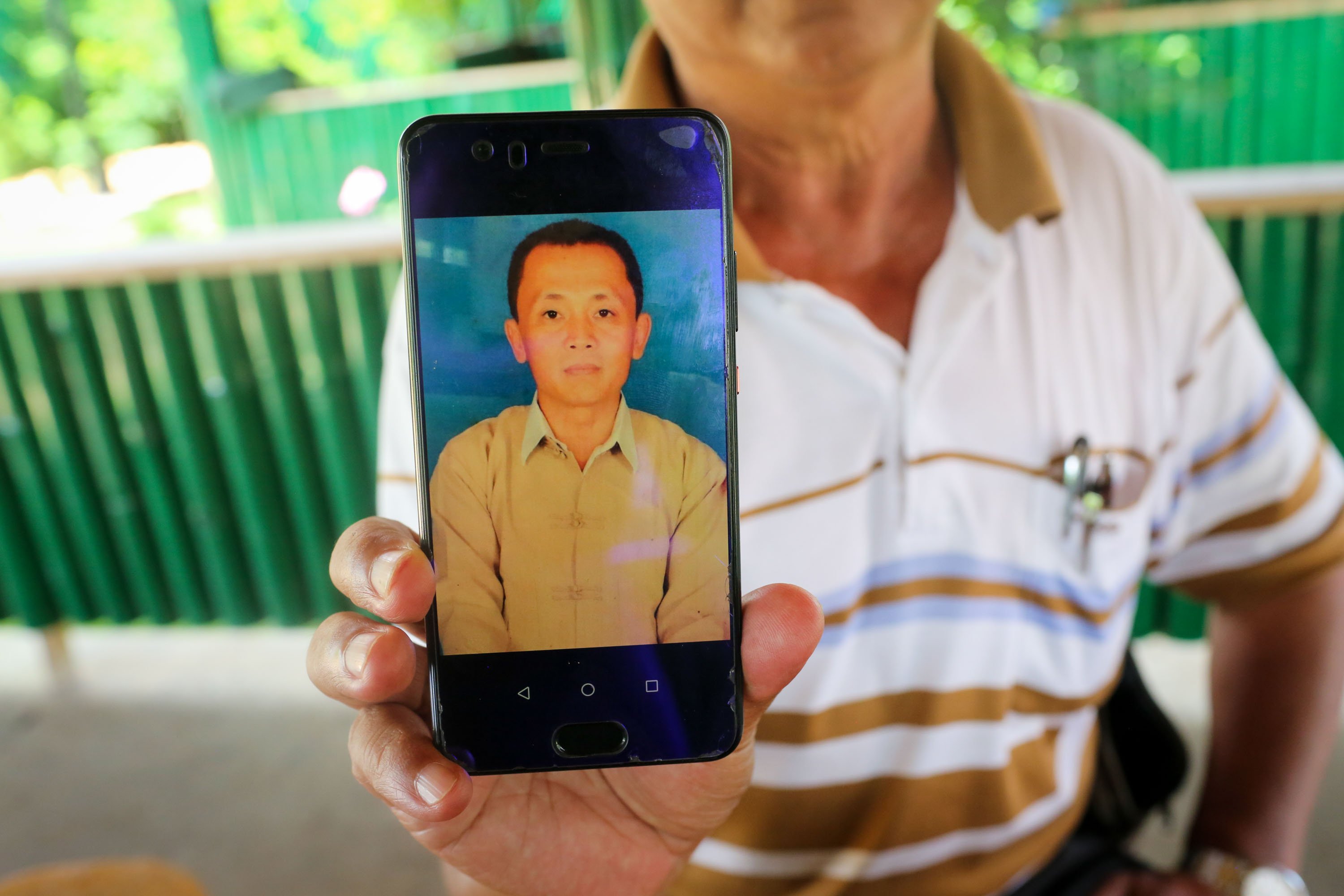 Sai Myint Mon shows a photo of his brother Sai Tint Cho, who is facing charges under 17(1). Sai Tint Cho was a village administrator in Nam Nu town in Kyaut May, Shan State, who was accused by the Tatmadaw of collecting taxes for EAOs. He is currently in prison. (China-Burma highway, between Hsipaw and Lashio, northern Shan State, 20 June 2019)

There are other laws that have been deliberately kept on the books and used against citizens in conflict zones, said Matthew Smith, a founder and the Chief Executive Officer of human rights advocacy group Fortify Rights. And the path to justice can be unachievable.

For people living in these areas, outside assistance can be unobtainable, as international aid to displaced people across the country remains extremely restricted by the military.

“Weaponising aid by blocking it, obstructing the work of humanitarian organisations, or otherwise denying civilians access to it is in violation of the laws of war and can amount to a war crime,” said Smith “The result is that many civilians lack adequate nutrition, health care, water and sanitation, shelter, and other basic needs.”

Meanwhile, the effects of war last years after the last shot is fired.

In Panglong, the same town in which Aung San’s Panglong Agreement was signed 70 years ago, Wee La Tat lays in his bed, the window beside him covered in plastic to hide the shattered glass broken by artillery shelling. He occasionally rubs his thigh, which abruptly ends above where his knee should be, the result of stepping on a landmine in 2016.

Having lost most of his hearing and vision, as well as his left leg and use of his right from the blast, his wife of over 30 years, Shwe Myat, speaks for him when there is company.

“There had been heavy fighting between the Tatmadaw and TNLA, so a few days after the fighting stopped he went to go see if the new hut he had built on [our] rice paddy had survived the fighting,” she said. “That’s when he stepped on the mine. The people who found him said when they saw him there was no leg bone left, just flaps of skin.” 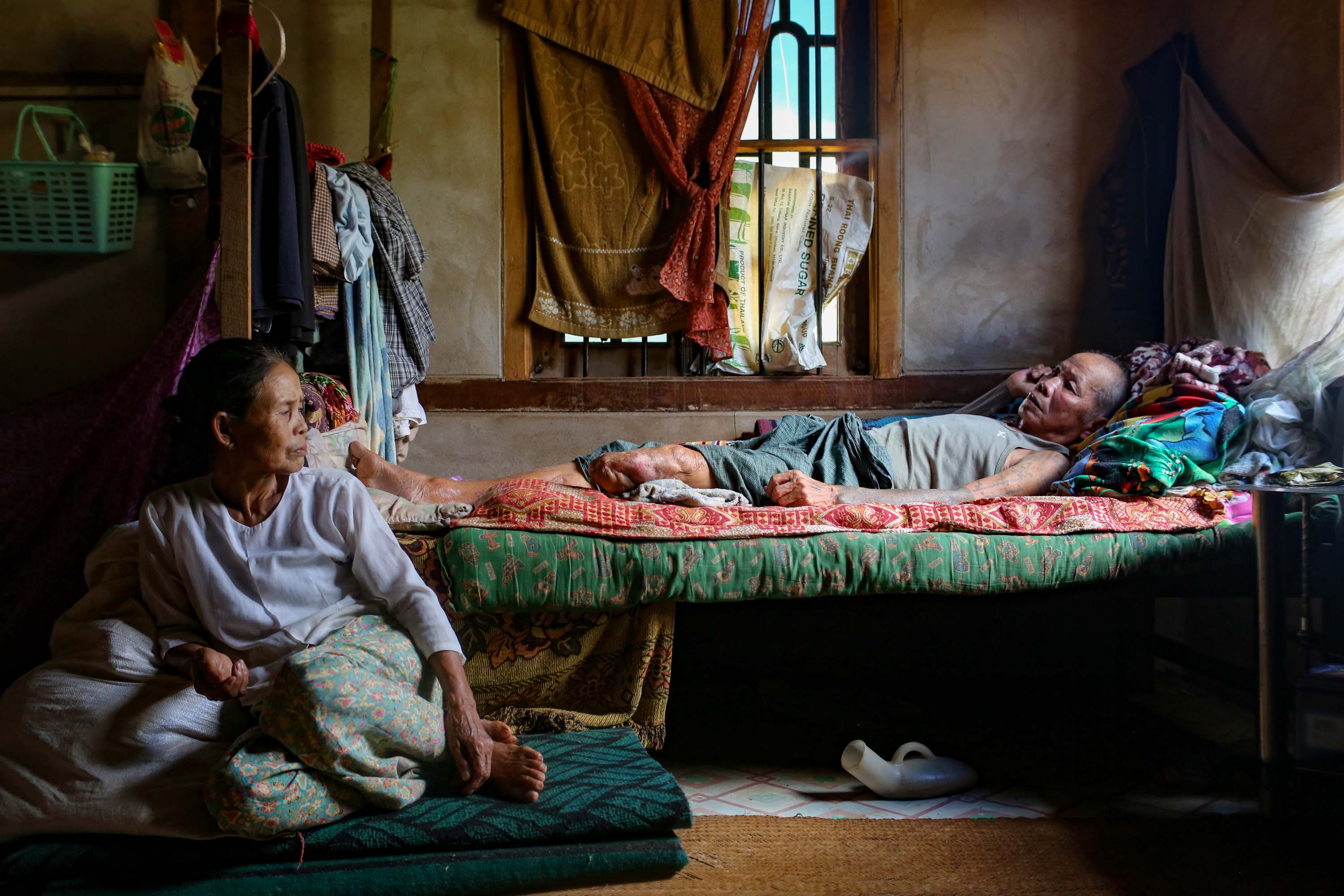 Landmine victim Wee La Tat (in bed) and his wife, Shwe Myat (on floor), sit in their home in Panglong Town, Panglong. Wee La Tat stepped on a landmine when going to check his crops after fighting in the region. He lost one leg and was rendered deaf from the blast. (Panglong, 19 June 2019)

Another thing Wee La Tat lost, his wife said, was his will to live.

“He has become like a dead man,” Shwe Myat explained. “When he speaks out, he just wants to speak about how he wants to die. He doesn’t want to live in this life anymore.”

Shwe Myat said that since the Tatmadaw arrived in the area two months ago, there has been more stability in the area.

“It’s good to have the Burmese soldiers here,” she said. “Without them the rivals are fighting around us so badly.”

But not all feel the same way.

Less than an hour’s drive east from Kutkai, a trading town on the China-Burma highway, around 200 refugees sit in the Kachin church compound at the end of a dirt road. Children play in the nearby field, while women hang blankets to dry.

Ja Bu, a woman in the church, said that she and other villagers fled when they heard gunfire between Kachin Independence Army and Tatmadaw troops.

“As we had bad experiences the last time there was fighting around the village, we were more proactive about leaving this time,” she said, referencing previous fighting between groups in the region over the past eight months. “We’ve been displaced before, and now we are displaced again.” 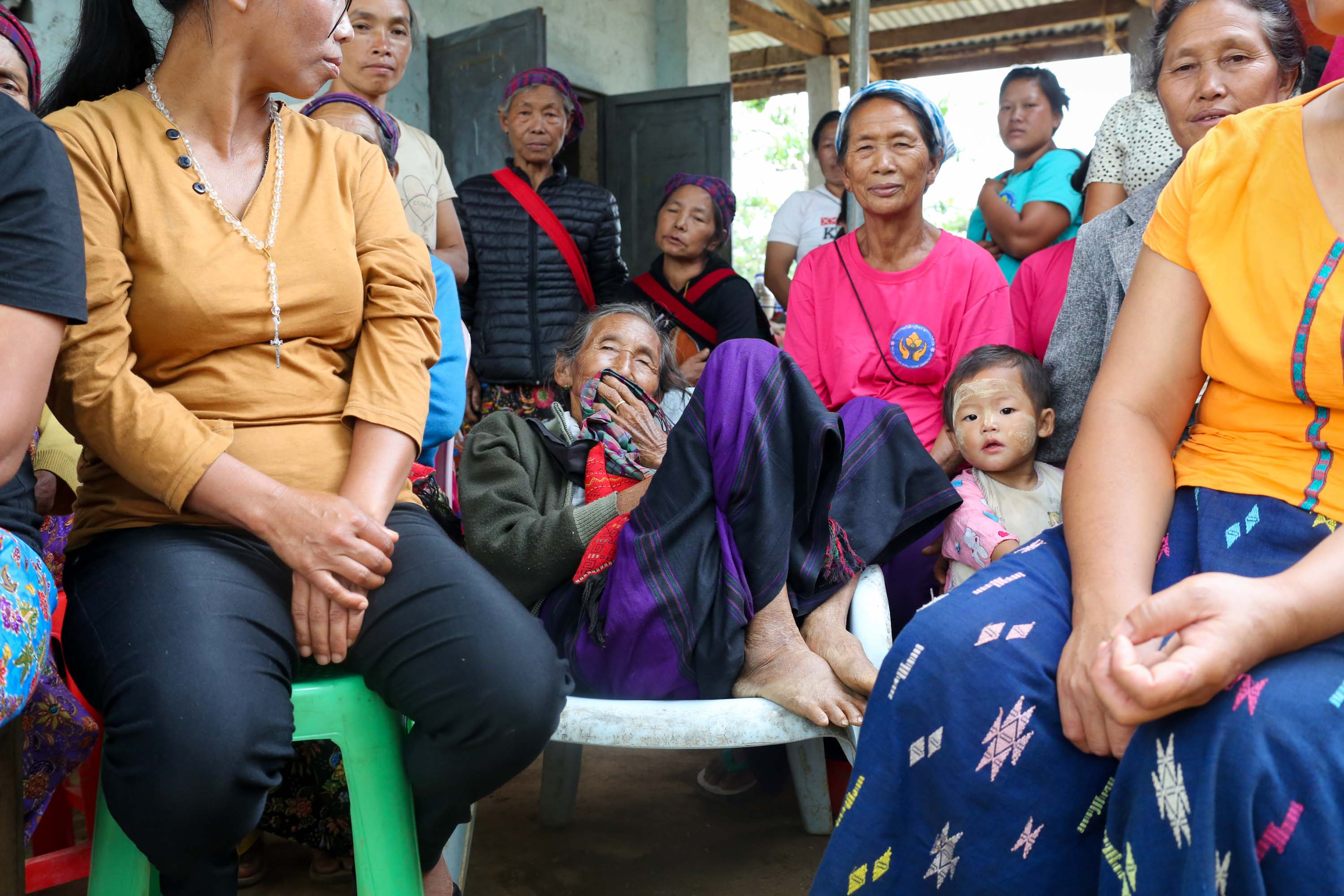 Women and children sit in newly displaced IDPs in a Kachin church a 40-minute drive east of Kutkai, Shan State. The IDPs arrived a week earlier when fighting between the TNLA and Tatmadaw broke out around their village in Mo Hann. The IDPs said that the TNLA has been present in the village for the past eight months. (Kutkai, 22 June 2019)

In the past year there has been escalated fighting across Myanmar, with the United Nations Independent International Fact-Finding Mission on Myanmar citing “consistent patterns of serious human rights violations and abuses”  by the Tatmadaw in Shan, Kachin and Rakhine states.

The most internationally recognised conflict escalation has been the Rohingya crisis, in which over 750,000 Rohingya Muslims fled to neighbouring Bangladesh during “clearance operations” conducted by the Burmese military after Arakan Salvation Rohingya Army members attacked more than 30 police outposts in Rakhine, killing 12 members of security forces in August 2017.

Human rights groups estimate that at least 6,700 Rohingya, including at least 730 children under the age of five, were killed in the first month of violence alone. In March 2018, United Nations Special Rapporteur on Myanmar Yanghee Lee said the crimes committed by the Burmese military bore “hallmarks of genocide,” and human rights groups estimate that 500,000 Rohingya continue to live in Myanmar today, in camps or camp-like conditions with limited access to food, education, or healthcare.

Meanwhile, the Myanmar government has denied responsibility for the attacks and released a statement in which it stated that it “resolutely rejects” a ruling from the International Criminal Court that said the body has jurisdiction over alleged deportations of Rohingya Muslims to Bangladesh as a possible crime against humanity.

Back in the Lisu Church IDP camp in Namtu, La See is asked if he thinks there will be peace in his lifetime. His answer was simple: “If you ask me about the future and what will happen, I have no idea.”