Origins of the longest civil war in the world

To understand the present-day relationships between Myanmar’s ethnic groups requires looking to history, which goes back hundreds of years to when ancient kingdoms—such as the Burman, Arakanese, and Mon-Khmer—were entrenched in conflicts that eventually created a central plain dominated by the Burmans.

Over centuries, other ethnic groups and minority populations also formed their own areas in the borderlands, which roughly represent the seven ethnic states of present-day Myanmar: Arakan, Chin, Kachin, Karen, Karenni, Mon and Shan.

The 1886 British annexation of the Burman Kingdom quickly caused far-reaching consequences for Myanmar’s ethnicities. This legacy impacts events to this day.

“When the colonists came they used a ‘divide and rule’ strategy,” said independent researcher Kim Jolliffe, who focuses on conflict and humanitarian issues. “They explicitly went against the majority Bamar (also called Burmese), who they thought were the most powerful and most likely to lead an uprising.”

This strategy led to the British building two separate systems, Jolliffe said: that of Burma Proper, dominated by the Burmese majority, and the “Frontier Areas,” which were dominated by ethnic groups. It was during this time that certain ethnic groups, like the Karen, began to be favoured by the British, while the Burmese were stripped of their majority power. Jolliffe explained that the rising nationalist sentiment among Burmese in the early 20th century can be attributed to this development.

With the nationalist uprising came the final push for Burma’s independence from Britain, during which time the military leader Aung San rose to prominence, ultimately negotiating the agreement that would lead to Burma’s breakaway from British rule.

Two weeks after signing the independence agreement with Britain, on 12 February 1947, together with Burma’s various ethnic leaders, Aung San signed the Panglong Agreement, a document that would come to be a rallying point for ethnic organisations across the country for decades to come.

The agreement stated that there would be “full autonomy in internal administration for the Frontier Areas,” which laid the groundwork for a more federalist system in Myanmar. The country’s name was officially changed in 1989, though Burma and Myanmar are still used interchangeably.

But in the late morning of 19 July 1947, just six months before Burma gained full independence from the British, armed paramilitaries stormed the grand Ministers’ Building in downtown Yangon, the capital at the time, killing Aung San and several of his cabinet ministers. To this day, the assassination is annually mourned across Myanmar. 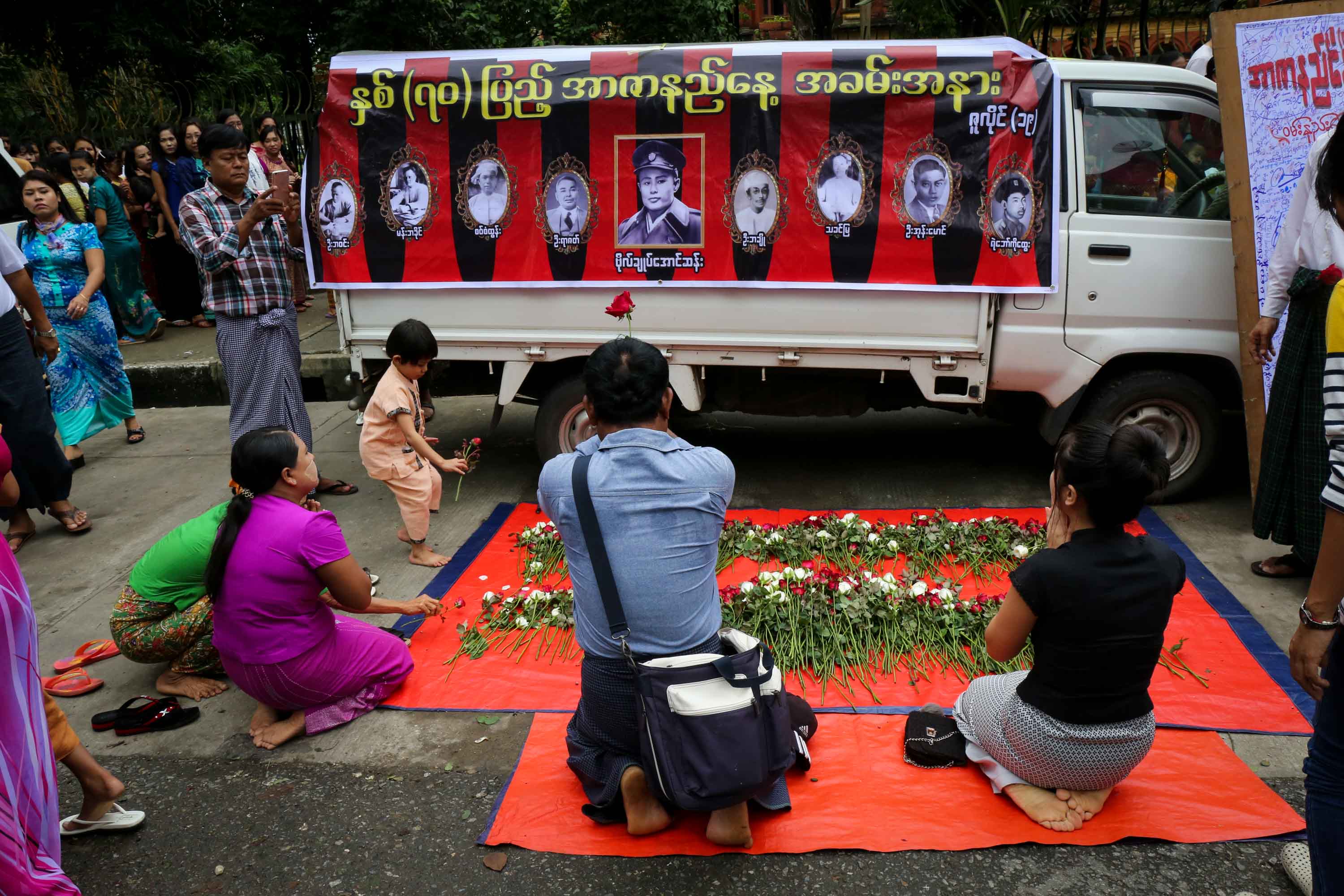 On Martyr’s Day, outside the Secretariat where Aung San was assassinated, mourners come to lay roses and pray on the anniversary of his death. The poster shows his icon in the centre. (Yangon, 19 July 2017)

Though Burma did go on to gain independence, the process of reconciliation between the country’s ethnic leaders was put on hold as an uprising by the Communist Party of Burma erupted, throwing Burma into civil war just months after it had gained independence.

In 1962, General Ne Win, a former prime minister, seized power from the transitional democratic government, disregarding legislation that had been previously signed, including the Panglong Agreement, and plunging the country into decades of brutal military rule that repressed free speech, opposition political parties and ethnic federalists.

“If the agreements of Panglong had been followed accordingly, there would not be civil war, there would be self-determination,” said Sao Hso Ten, the guiding patron of the Shan State Progress Party/Shan State Army-North, which has been involved in Burma’s civil war since the 1960s. “But it wasn’t followed; a military government was created instead.”

As the Burmese military, known as the Tatmadaw, looked to expand its power and reclaim Burmese culture, which it viewed as suppressed by the British, it implemented a policy of “Burmanisation” which aimed to unify the country by homogenizing its people. To start, ethnic languages, religion, culture and history were banned from being taught or used.

“There was a huge push to remake everything about ‘true Bamar’ culture again… it was meant to push back against colonialism but ended up being most forceful with ethnic minorities all over the country,” Jolliffe said in relation to how the policies exacerbated tensions between the Tatmadaw and ethnic groups. “The policies were very militaristic, and a huge reason why ethnic groups felt like their culture was under threat.”

In the 1960s, as civil war raged on, the Burmese military started using the ‘Four Cuts’ strategy, intended to suppress support from ethnic communities for ethnic opposition armies by cutting off the four main links between them: food, funds, intelligence and recruits. The results of the strategy were devastating, Jolliffe explained.

“The strategy is based on the need to defy insurgents sanctuary and take away their support from local people,” he said. “The impact of that strategy comes really close to some form of ethnic cleansing, even if not intentional, as it becomes about targeting specific ethnic groups.”

In order to cut support from rural villagers for ethnic armies, the Burmese military began relocating, attacking and destroying villages, while often torturing and killing anyone suspected of aiding the opposition groups. Entire communities were forced to move to fenced-in areas subject to tight military control.

According to Human Rights Watch, during this time, and for decades to come, the military undertook vast, well-documented human rights abuses, including “widespread summary executions, looting, torture, rape and other sexual violence, arbitrary arrests and torture, forced labour, recruitment of child soldiers, and the displacement and demolition of entire villages” as part of operations against ethnic minority armed opposition groups. All of which, Jolliffe said, left lasting scars on the country’s ethnic communities. 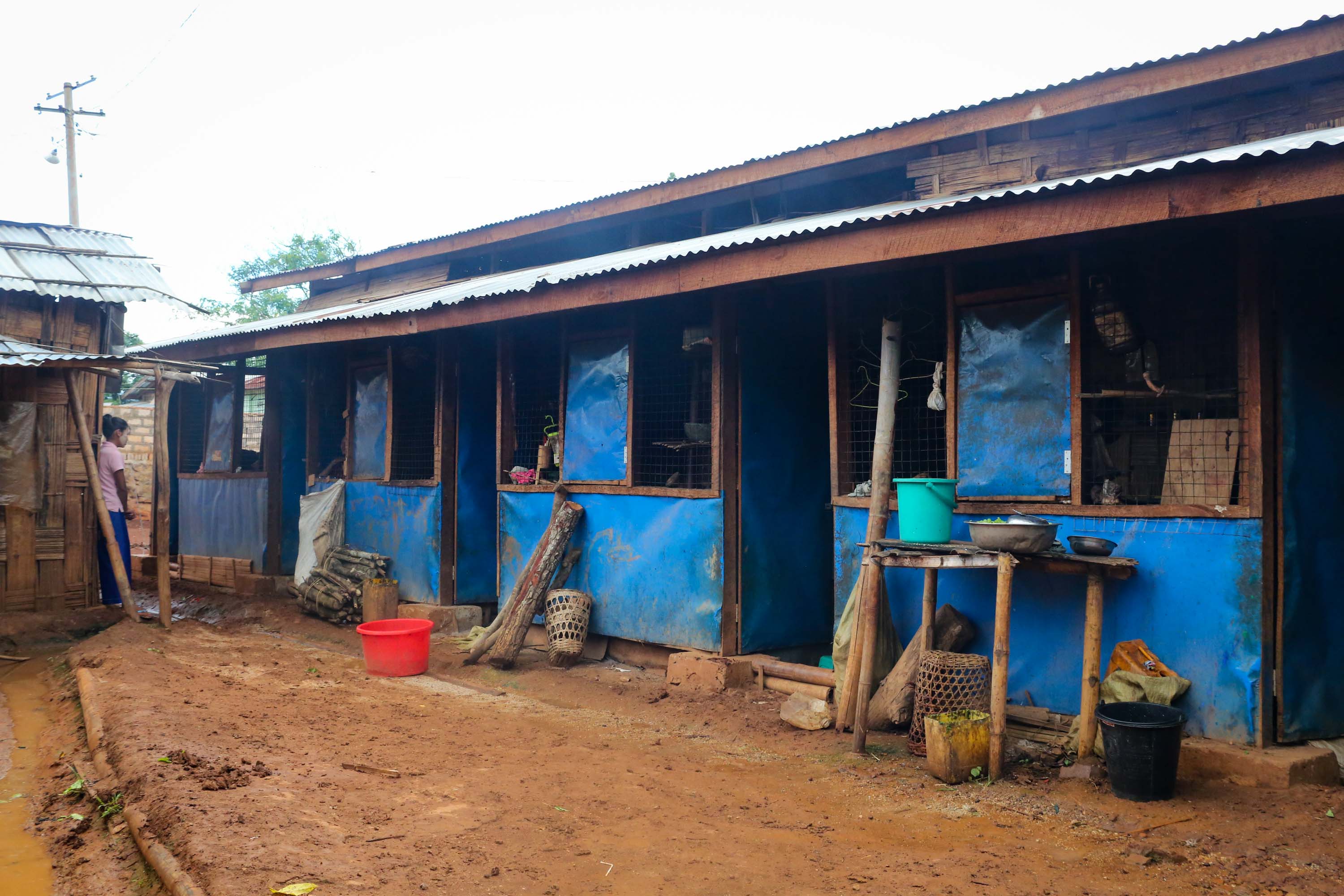 Row homes in the Lisu Church IDP camp in Namtu. More than 200 people live in the camp, which was established in July 2016 after fighting broke out between EAOs in the region. (Namtu, 18 June 2019)

The civil war dragged on through the 1970s and 80s, exhausting the resources of many ethnic groups. By the 1990s, many armed ethnic groups could no longer withstand intensified military attacks and entered into ceasefire agreements. Some of these deals subsequently broke down, while others prompted new armed groups to form. Some ethnic leaders were lured by the Burmese military into signing agreements based on economic privileges and economic benefits, transforming them into Tatmadaw-backed militias, most often in ethnic areas.

Another major point of contention between ethnic groups and the military was the draft of the 2008 constitution, the final version of which is still law in Myanmar today.

This document created many changes: it took some armed groups and turned them into Tatmadaw-aligned militias, placing them under direct Burmese army control. It also legislated that anyone married to a person who was not a citizen of Myanmar would be barred from running for president. This meant that Aung San Suu Kyi, daughter of revolutionary hero Aung San and leader of the National League for Democracy, a major opposition party, as well as the widow of a British citizen, would never be able to become president.

It also reserved 25% of parliamentary seats—enough to hold veto power over any legislation—for the Tatmadaw. This, Jolliffe said, was done to “secure the power of the military” and make sure moves toward centralisation remained under Tatmadaw control.

“In substance, the constitution is very centralised still. That’s an issue the armed groups have with it,” he said.

International organisations condemned the new constitution, including Amnesty International, who called the document an “effort to undermine respect for human rights and to entrench military rule and impunity.” Local groups including the National League for Democracy, All Burma Monks’ Alliance, ethnic armed organisations and others also rejected the legislation.

“The constitution was, and still is, run by the military and it’s a military type government,” Sao Hso Ten, the patron of the Shan State Progress Party/Shan State Army-North, told Global Ground Media. 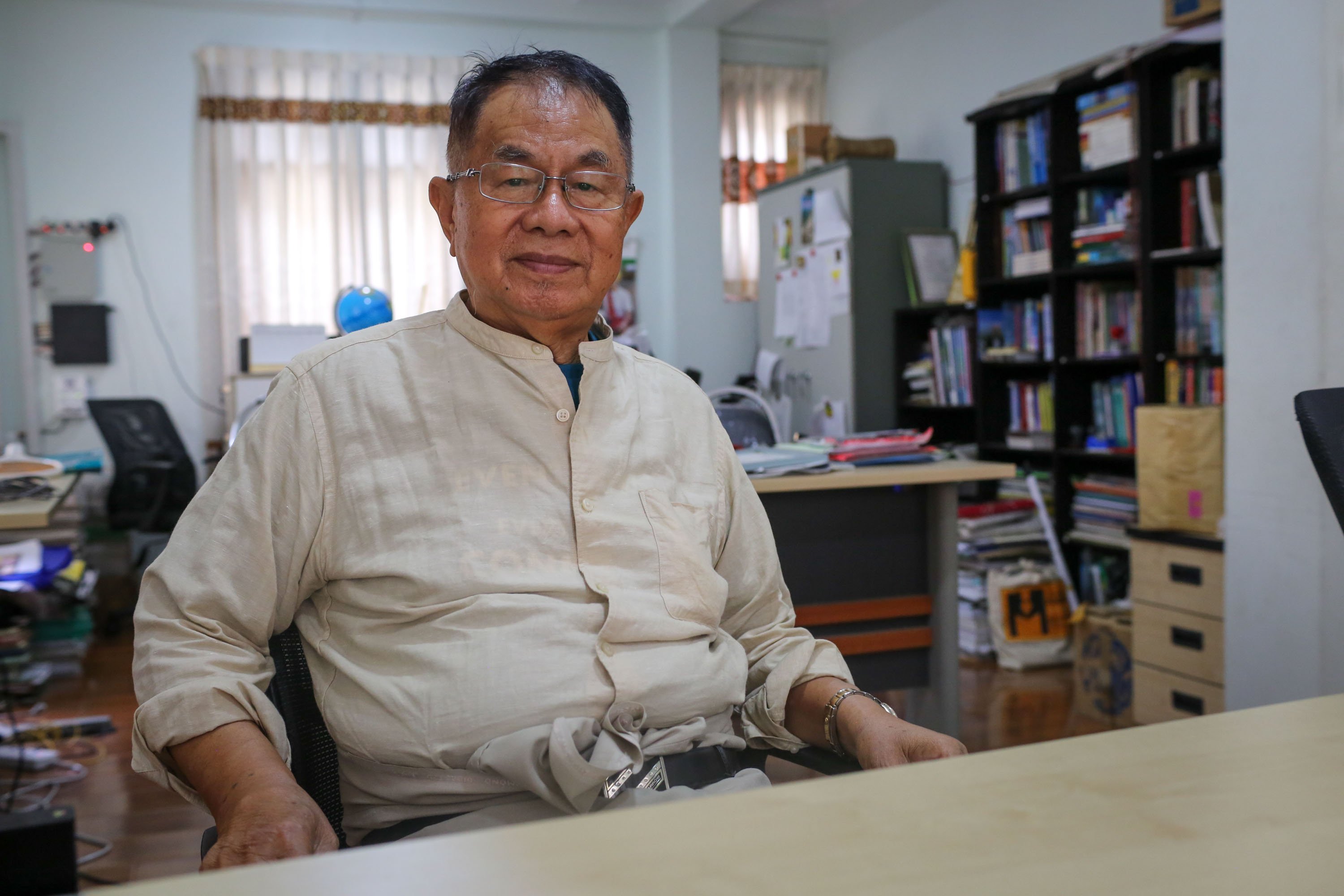 Shortly after the November 2010 general election, which the international community deemed not free and fair, as the military-backed party maintained rule, the government, led by then-president and former military general Thein Sein, also began to negotiate new ceasefires with various ethnic resistance movements.

That same year, Aung San Suu Kyi was released from house arrest, which she had been placed under for more than 15 years. The day after her release, she said “a second Panglong Conference addressing the concerns of the 21st century is needed for national reconciliation,” referencing the  ongoing civil conflict in Myanmar.

“The nationwide ceasefire agreement is a historic gift from us to our generations of the future,” Thein Sein said at a signing ceremony in Naypyidaw, now the country’s capital. “This is our heritage. The road to future peace in Myanmar is now open.”

Yet the NCA came with important caveats, as two of the largest ethnic armed organisations, the United Wa State Army and the Kachin Independence Organisation, were not signatories. Other groups that were invited declined to participate in the process or dropped out during negotiations due to perceived unfairness. Fighting also continued in Shan and Kachin states at the time of the ceasefire’s signing.

Aung San Suu Kyi’s National League for Democracy, which included “equal rights for every nationality and religion” as part of its campaign platform, won by what some called a “landslide victory,” bringing hope that she would finally be able to pick up where her father had left off in the country’s peace process nearly 70 years earlier. 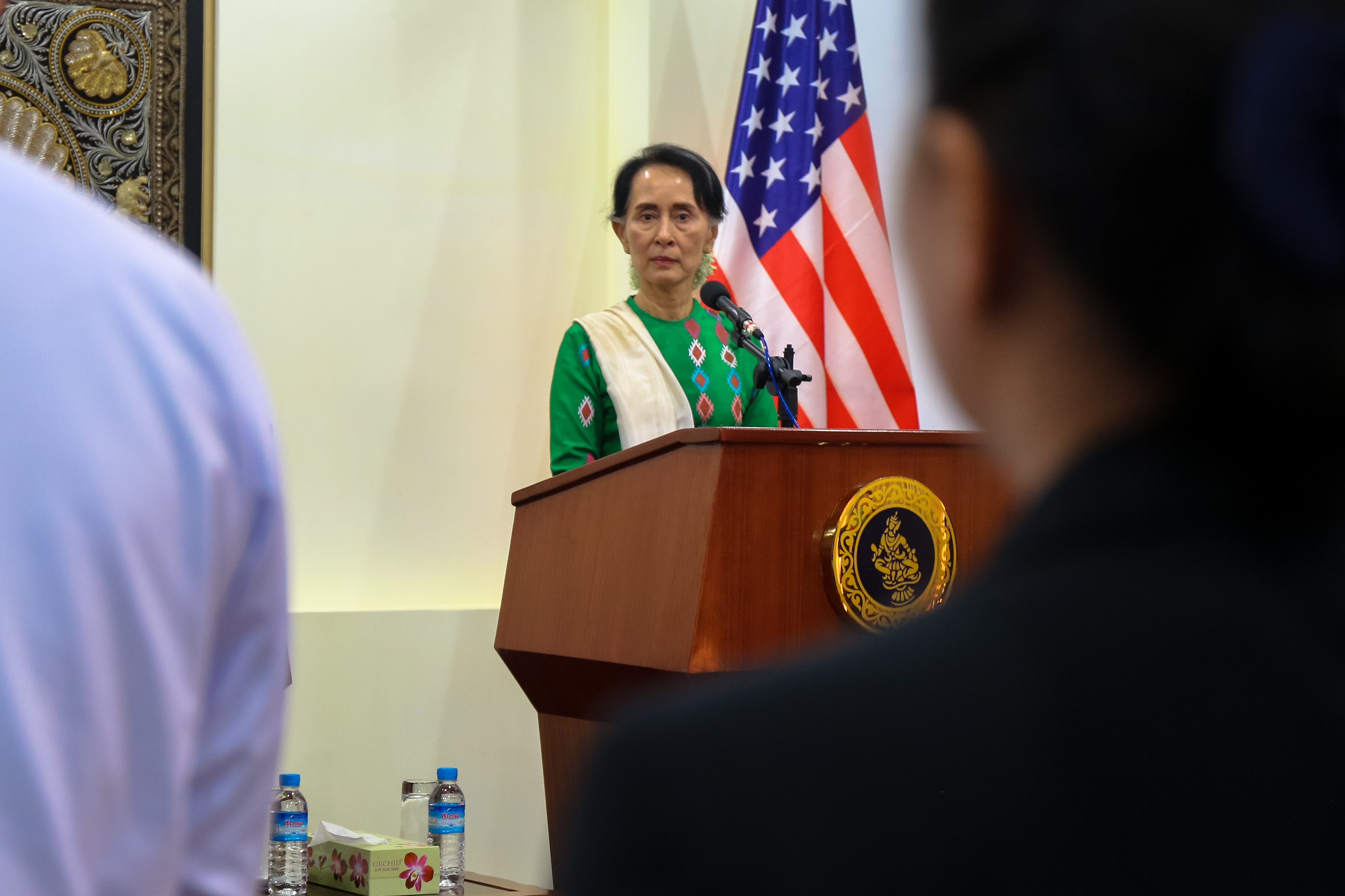