Serving the poor or profiting off them?

Have MFIs and regulators learned from the mistakes of the past? (part 1)

Microfinance is the loaning of small amounts of credit to the poor without collateral. Boasting excellent repayment rates, it became an investment opportunity and grew at a frenetic pace in India in the 2000s.

Between 2008 and 2009, the loan portfolio of Microfinance Institutions (MFIs) grew at a breakneck rate of 97 percent in India. A spate of suicides in 2010 – more than 80 – by borrowers, along with mass defaults, “burst the bubble of microfinance.”

About 9.2 million borrowers in Andhra Pradesh defaulted on their loans. The microfinance crisis was likened to subprime lending in the US, which triggered the 2008 global financial crisis.

Data from the Microfinance Institutions Network (MFIN), a major Indian microfinance industry association, suggests that the sector is growing again.

Following the 2010 crisis, MFIs were forced to slow their expansion. Bank lending to MFIs dried up, and unpaid loans also mounted. In October 2010,  the Andhra Pradesh government passed an ordinance, which became a law the same year, imposing several restrictions on MFIs, such as the curtailing of unrestrained multiple lending and regulations on methods used to recover loans. However, growth resumed when NBFC-MFIs registered an 84 percent rise in outstanding loans in 2015-2016 compared to the previous year. 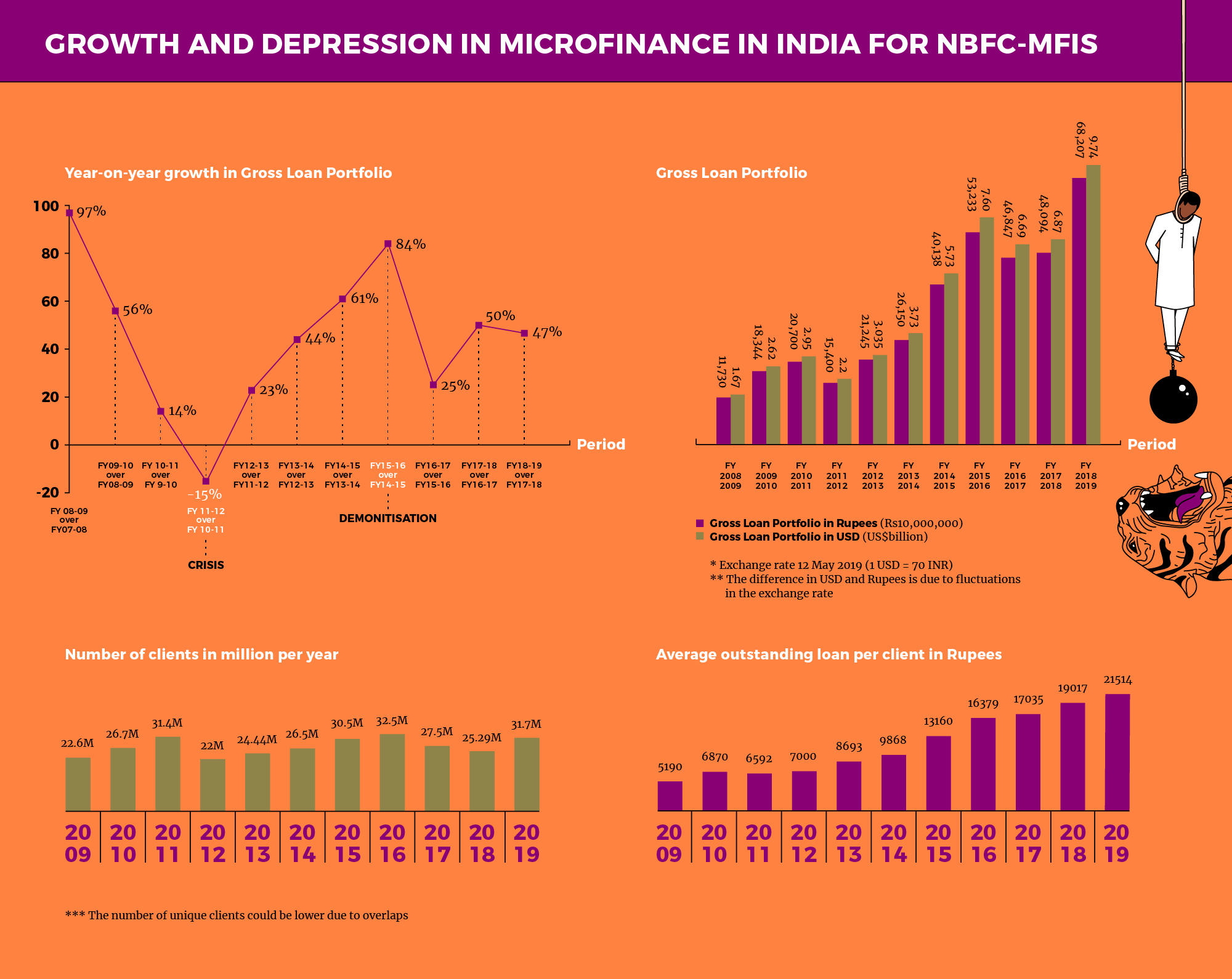 Growth briefly lagged during the demonetisation of the Indian economy in November 2016, which saw a ban on the use of 500 and 1,000 rupee notes, causing severe setbacks in gross loan portfolio and client numbers. Year-on-year growth of NBFC-MFIs was only 25 percent in the 2016-2017 period, while the entire microfinance industry grew by only 26 percent.

After that short lag caused by external circumstances, growth seems to be back on track, with 50 percent growth of NBFC-MFIs in 2017-2018 and 47 percent growth in 2018-19, according to the latest MFIN data.

NBFC-MFIs are the largest providers of microfinance, at 37 percent, with banks coming in second, at 32 percent, as indicated by MFIN’s Micrometer report from December 2018.

The resumed growth has left experts wondering if the old practices of overlending are indeed extinct.

Regulatory oversight after the crisis

The 2010 microfinance crisis caused the Reserve Bank of India (RBI) to intervene and more strictly regulate the sector. In the 2011 Malegam committee report, a new category of non-banking financial companies was created, the Non-Banking Finance Companies-Microfinance Institutions (NBFC-MFIs), to regulate NBFCs engaged in microfinance.

The committee outlined guidelines to prevent multiple lending, overlending and ghost borrowers, where people other than the real beneficiary receive loans.

It also reiterated what constitutes coercive loan recovery methods, like collecting weekly payments instead of monthly repayments, even though RBI officially allows weekly repayments, and ordered the establishment of credit bureaus.

The industry associations, MFIN and Sa-Dhan, received recognition as self-regulatory organisations (SROs) in 2014 and 2015, respectively. They created a code of conduct for NBFC-MFIs and began ensuring their compliance. However, the primary responsibility for compliance with RBI guidelines fell to individual MFIs. Self-regulatory organisations, meanwhile, were tasked with updating the RBI on all sector developments, conducting investigations and submitting quarterly reports.

During interviews and email conversations with Global Ground Media, MFIN and Sa-Dhan representatives did not hold MFIs responsible for the 2010 Andhra Pradesh crisis, despite the RBI regulatory action that followed.

In an emailed response to Global Ground Media, MFIN CEO, Harsh Shrivastava, said the NBFC-MFI industry had to grow while adhering to responsible lending and client protection. According to Shrivastava, the market is largely underpenetrated, with the “current credit depth” of NBFC-MFIs at 15 percent.

However, the Responsible Finance India Report (2016), by the same Professor Misra from MFIN, states, “[f]ield staff members continue to push for higher-sized loans, and despite credit bureau checks, there is substantial multiple lending.”

The report also noted that, “credit bureau reports had critical gaps, such as authenticity of data, and failed to provide a full picture of borrowers’ indebtedness in some cases.”

More recently, the Inclusive Finance India Report 2018, compiled by Professor Misra and Ajay Tankha, a development consultant, also highlights troubling trends. The report notes the forced retailing of third-party products by MFIs, to which MFIN’s response is that it has issued a ‘Directive for Third Party Products’ which does not include punitive actions for offenders.

Pillarisetti Satish, the Executive Director of Sa-Dhan, whose members are small- or medium-sized NBFC-MFIs and NGOs, said that “member institutions receive code of conduct training, undergo audits to check adherence to the code of conduct and are subject to a surveillance team. There is also a grievance redressal mechanism.”

Sa-Dhan intervened following reports of suicides due to microfinance loans in Kerala’s Palakkad District in 2018. The New Indian Express reported at the time that three individuals had committed suicide after taking loans from microfinance companies and being pressured to repay.

No MFI faced action following the suicides in Kerala. Instead, Satish stated that Sa-Dhan “provided counselling” to employees of NBFC-MFIs in Palakkad on how over-indebted clients should be dealt with, and to refrain from coercive action.

Satish said that Sa-Dhan found both MFIs and moneylenders present in the area. “We did not take specific action against any MFI, because MFI loans to individuals were within limits. But the borrowers had themselves borrowed from many institutions. Therefore, the MFI is technically not at fault,” he said. Later, Satish admitted to Global Ground Media that MFIs should check if potential customers are in a debt trap by checking with credit rating bureaus.

RBI places the responsibility for checking loan limits on NBFC-MFIs, and not the client. RBI rules forbid lending to clients who have loans with two NBFC-MFIs and already have loans amounting to Rs100,000. The rules also require NBFC-MFIs to join a credit bureau, with which they need to check client debt and also share the loan details of their own clients.

During demonetisation in November 2016, NBFC-MFIs were again accused of coercive tactics during loan recovery. Following protests by female borrowers and police complaints against companies in Nagpur and Amravati, the Maharashtra government in April 2017 formed a committee to inquire into collateral-free loans given by microfinance companies in the Vidarbha region of eastern Maharashtra, which comprises Nagpur and Amravati divisions. The committee submitted its report to the government in May 2018.

The primary motive of NBFC-MFIs, according to the report, was maximising profits while neglecting the skills of rural women or village and cottage industry development.

Meanwhile, the interest rate of NBFC-MFIs is between 22 percent and 26 percent as permitted by the RBI, higher than the average 9 to 10 percent interest rate in the banking sector.

The report’s authors asked the RBI to increase surveillance of MFIs, ensure effective implementation of the 2011 Malegam Committee recommendations, guarantee reasonable interest rates of up to 20 percent, avoid multiple loan disbursements to the same borrower and provide insurance to borrowers.

Responding to the allegations in the report, an MFIN spokesperson told Global Ground Media, “[t]he Maharashtra government…has also put on record the good work being done by microfinance companies, along with highlighting places where there is room for improvement.”

However,  microfinance industry reports and the Maharashtra government committee findings have stressed continued overlending, coercive recovery techniques and lack of assessing clients’ ability to take on a loan.